Return of the Brigadier 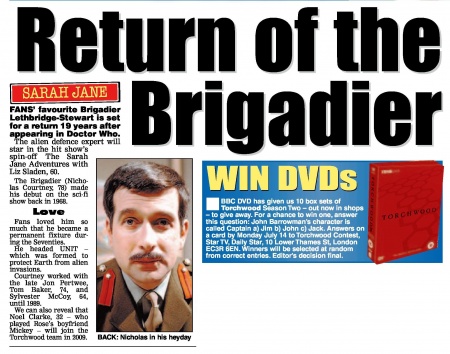 FANS' favourite Brigadier Lethbridge-Stewart is set for a return 19 years after appearing in Doctor Who. The alien defence expert will star in the hit show's spin-off The Sarah Jane Adventures with Liz Sladen, 60.

The Brigadier (Nicholas Courtney, 78) made his debut on the sci-fi show back in 1968.

Fans loved him so much that he became a permanent fixture during the Seventies.

He headed UNIT which was formed to protect Earth from alien invasions.

We can also reveal that Noel Clarke, 32 - who played Rose's boyfriend Mickey - will join the Torchwood team in 2009.

BACK: Nicholas in his heyday

BBC DVD has given us 10 box sets of Torchwood Season Two - out now in shops - to give away. For a chance to win one, answer this question: John Barrowman's character is called Captain a) Jim b) John c) Jack. Answers on a card by Monday July 14 to Torchwood Contest, Star TV, Daily Star, 10 Lower Thames St, London EC3R 6EN. Winners will be selected at random from correct entries. Editor's decision final.