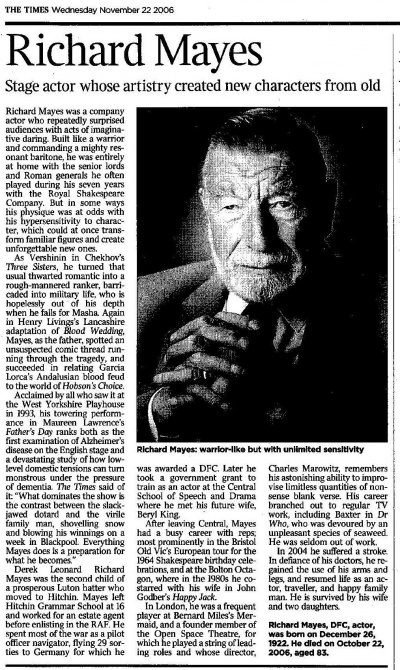 Richard Mayes was a company actor who repeatedly surprised audiences with acts of imaginative daring. Built like a warrior and commanding a mighty resonant baritone, he was entirely at home with the senior lords and Roman generals he often played during his seven years with the Royal Shakespeare Company. But in some ways his physique was at odds with his hypersensitivity to character, which could at once transform familiar figures and create unforgettable new ones.

As Vershinin in Chekhov's Three Sisters, he turned that usual thwarted romantic into a rough-mannered ranker, barricaded into military life, who is hopelessly out of his depth when he falls for Masha. Again in Henry Livings's Lancashire adaptation of Blood Wedding, Mayes, as the father, spotted an unsuspected comic thread running through the tragedy, and succeeded in relating Garcia Lorca's Andalusian blood feud to the world of Hobson's Choice.

Acclaimed by all who saw it at the West Yorkshire Playhouse in 1993, his towering performance in Maureen Lawrence's Father's Day ranks both as the first examination of Alzheimer's disease on the English stage and a devastating study of how low- level domestic tensions can turn monstrous under the pressure of dementia. The Times said of it: "What dominates the show is the contrast between the slack jawed dotard and the virile family man, shovelling snow and blowing his winnings on a week in Blackpool. Everything Mayes does is a preparation for what he becomes."

Derek Leonard Richard Mayes was the second child of a prosperous Luton hatter who moved to Hitchin. Mayes left Hitchin Grammar School at 16 and worked for an estate agent before enlisting in the RAF. He spent most of the war as a pilot officer navigator, flying 29 sorties to Germany for which he was awarded a DFC. Later he took a government grant to train as an actor at the Central School of Speech and Drama where he met his future wife, Beryl King.

After leaving Central, Mayes had a busy career with reps; most prominently in the Bristol Old Vic's European tour for the 1964 Shakespeare birthday celebrations, and at the Bolton Octagon, where in the 1980s he co-starred with his wife in John Godber's Happy Jack.

In London, he was a frequent player at Bernard Miles's Mermaid, and a founder member of the Open Space Theatre, for which he played a string of leading roles and whose director, Charles Marowitz, remembers his astonishing ability to improvise limitless quantities of nonsense blank verse. His career branched out to regular TV work, including Baxter in Dr Who, who was devoured by an unpleasant species of seaweed. He was seldom out of work.

In 2004 he suffered a stroke. In defiance of his doctors, he regained the use of his arms and legs, and resumed life as an actor, traveller, and happy family man.

He is survived by his wife and two daughters.