Run for your life 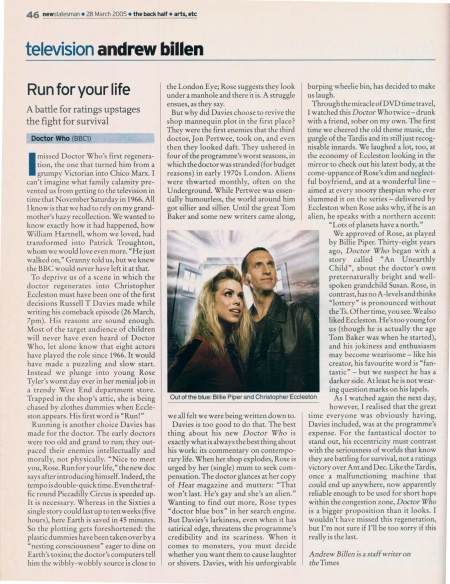 A battle for ratings upstages the fight for survival

I missed Doctor Who's first regeneration, the one that turned him from a grumpy Victorian into Chico Marx. I can't imagine what family calamity prevented us from getting to the television in time that November Saturday in 1966. All I know is that we had to rely on my grandmother's hazy recollection. We wanted to know exactly how it had happened, how William Hartnell, whom we loved, had transformed into Patrick Troughton, whom we would love even more. "He just walked on," Granny told us, but we knew the BBC would never have left it at that.

To deprive us of a scene in which the doctor regenerates into Christopher Eccleston must have been one of the first decisions Russell T Davies made while writing his comeback episode (26 March, 7pm). His reasons are sound enough. Most of the target audience of children will never have even heard of Doctor Who, let alone know that eight actors have played the role since 1966. It would have made a puzzling and slow start. Instead we plunge into young Rose Tyler's worst day ever in her menial job in a trendy West End department store. Trapped in the shop's attic, she is being chased by clothes dummies when Eccleston appears. His first word is "Run!"

Running is another choice Davies has made for the doctor. The early doctors were too old and grand to run; they outpaced their enemies intellectually and morally, not physically. "Nice to meet you, Rose. Run for your life," the new doc says after introducing himself. Indeed, the tempo is double-quick time. Even the traffic round Piccadilly Circus is speeded up. It is necessary. Whereas in the Sixties a single story could last up to ten weeks (five hours), here Earth is saved in 45 minutes. So the plotting gets foreshortened: the plastic dummies have been taken over by a "nesting consciousness" eager to dine on Earth's toxins; the doctor's computers tell him the wibbly-wobbly source is close to the London Eye; Rose suggests they look under a manhole and there it is. A struggle ensues, as they say.

But why did Davies choose to revive the shop mannequin plot in the first place? They were the first enemies that the third doctor, Jon Pertwee, took on, and even then they looked daft. They ushered in four of the programme's worst seasons, in which the doctor was stranded (for budget reasons) in early 1970s London. Aliens were thwarted monthly, often on the Underground. While Pertwee was essentially humourless, the world around him got sillier and sillier. Until the great Tom Baker and some new writers came along, we all felt we were being written down to.

Davies is too good to do that. The best thing about his new Doctor Who is exactly what is always the best thing about his work: its commentary on contemporary life. When her shop explodes, Rose is urged by her (single) mum to seek compensation. The doctor glances at her copy of Heat magazine and mutters: "That won't last. He's gay and she's an alien." Wanting to find out more, Rose types "doctor blue box" in her search engine. But Davies's larkiness, even when it has satirical edge, threatens the programme's credibility and its scariness. When it comes to monsters, you must decide whether you want them to cause laughter or shivers. Davies, with his unforgivable burping wheelie bin, has decided to make us laugh.

Through the miracle of DVD time travel, I watched this Doctor Who twice -drunk with a friend, sober on my own. The first time we cheered the old theme music, the gurgle of the Tardis and its still just recognisable innards. We laughed a lot, too, at the economy of Eccleston looking in the mirror to check out his latest body, at the come-uppance of Rose's dim and neglectful boyfriend, and at a wonderful line - aimed at every snooty thespian who ever slummed it on the series - delivered by Eccleston when Rose asks why, if he is an alien, he speaks with a northern accent: "Lots of planets have a north."

We approved of Rose, as played by Billie Piper. Thirty-eight years ago, Doctor Who began with a story called "An Unearthly Child", about the doctor's own preternaturally bright and well-spoken grandchild Susan. Rose, in contrast, has no A-levels and thinks "lottery" is pronounced without the Ts. Of her time, you see. We also liked Eccleston. He's too young for us (though he is actually the age Tom Baker was when he started), and his jokiness and enthusiasm may become wearisome - like his creator, his favourite word is "fantastic" - but we suspect he has a darker side. At least he is not wearing question marks on his lapels.

As I watched again the next day, however, I realised that the great time everyone was obviously having, Davies included, was at the programme's expense. For the fantastical doctor to stand out, his eccentricity must contrast with the seriousness of worlds that know they are battling for survival, not a ratings victory over Ant and Dec. Like the Tardis, once a malfunctioning machine that could end up anywhere, now apparently reliable enough to be used for short hops within the congestion zone, Doctor Who is a bigger proposition than it looks. I wouldn't have missed this regeneration, but I'm not sure if I'll be too sorry if this really is the last.

Caption: Out of the blue: Billie Piper and Christopher Eccleston