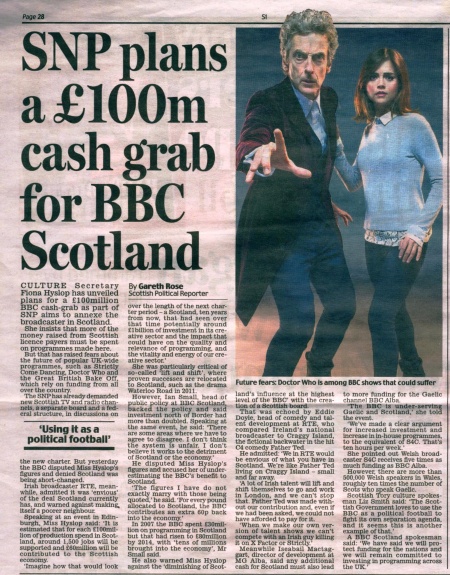 CULTURE Secretary Fiona Hyslop has unveiled plans for a £100million BBC cash-grab as part of SNP aims to annexe the broadcaster in Scotland.

She insists that more of the money raised from Scottish licence payers must be spent on programmes made here. But that has raised fears about the future of popular UK-wide programmes, such as Strictly Come Dancing, Doctor Who and the Great British Bake Off, which rely on funding from all over the country.

The SNP has already demanded new Scottish TV and radio channels, a separate board and a federal structure, in discussions on the new charter. But yesterday the BBC disputed Miss Hyslop's figures and denied Scotland was being short-changed.

Irish broadcaster RTE, meanwhile, admitted it was 'envious' of the deal Scotland currently has, and warned against making, itself a poorer neighbour.

Speaking at an event in Edinburgh, Miss Hyslop said: 'It is estimated that for each £100mil-lion of production spend in Scotland, around 1,500 jobs will be supported and £60million will be contributed to the Scottish economy.

'Imagine how that would look over the length of the next charter period - a Scotland, ten years from now, that had seen over that time potentially around Elbillion of investment in its creative sector and the impact that could have on the quality and relevance of programming, and the vitality and energy of our creative sector.'

She was particularly critical of so-called 'lift and shift', where proven successes are relocated to Scotland, such as the drama Waterloo Road in 2011.

However, Ian Small, head of public policy at BBC Scotland, backed the policy and said investment north of Border had more than doubled. Speaking at the same event, he said: 'There are some areas where we have to agree to disagree. I don't think the system is unfair. I don't believe it works to the detriment of Scotland or the economy.'

He disputed Miss Hyslop's figures and accused her of underestimating the BBC's benefit to Scotland.

'The figures I have do not exactly marry with those being quoted,' he said. 'For every pound allocated to Scotland, the BBC contributes an extra 60p back into the economy.'

In 2007 the BBC spent £30mil-lion on programming in Scotland but that had risen to £80million by 2014, with 'tens of millions brought into the economy', Mr Small said.

He also warned Miss Hyslop against the 'diminishing of Scotland's influence at the highest, level of the BBC' with the creation of a Scottish board.

That was echoed by Eddie Doyle, head of comedy and talent development at RTE, who compared Ireland's national broadcaster to Craggy Island, the fictional backwater in the hit C4 comedy Father Ted.

He admitted: 'We in RTE would be envious of what you have in Scotland. We're like Father Ted living on Craggy Island - small and far away.

'A lot of Irish talent will lift and shift themselves to go and work in London, and we can't stop that. Father Ted was made without our contribution and, even if we had been asked, we could not have afforded to pay for it.

'When we make our own version of talent shows we can't compete with an Irish guy killing it on X Factor or Strictly.'

'The BBC is under-serving Gaelic and Scotland,' she told the event.

'We've made a clear argument for increased investment and increase in in-house programmes, to the equivalent of S4C. That's ten hours per week.'

She pointed out Welsh broadcaster S4C receives five times as much funding as BBC Alba.

However, there are more than 500,000 Welsh speakers in Wales, roughly ten times the number of Scots who speak Gaelic.

Scottish Tory culture spokesman Liz Smith said: 'The Scottish Government loves to use the BBC as a political football to fight its own separation agenda, and it seems this is another example of that.'

A BBC Scotland spokesman said: 'We have said we will protect funding for the nations and we will remain committed to investing in programming across the UK.'

Caption: Future fears: Doctor Who is among BBC shows that could suffer