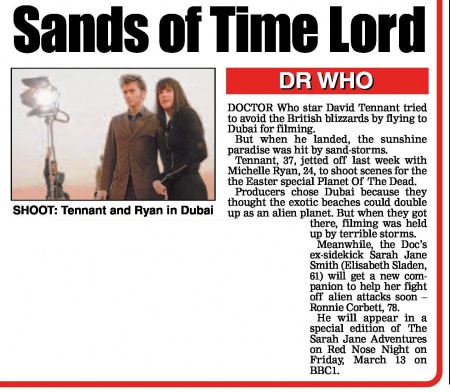 DOCTOR Who star David Tennant tried to avoid the British blizzards by flying to Dubai for filming.

But when he landed, the sunshine paradise was hit by sand-storms.

Tennant, 37, jetted off last week with Michelle Ryan, 24, to shoot scenes for the the Easter special Planet Of The Dead.

Producers chose Dubai because they thought the exotic beaches could double up as an alien planet. But when they got there, filming was held up by terrible storms.

He will appear in a special edition of The Sarah Jane Adventures on Red Nose Night on Friday, March 13 on BBC1.