Say hello to the new Doctor Who 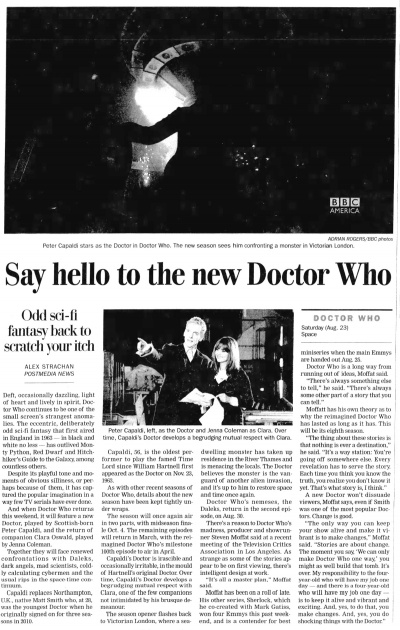 Odd sci-fi fantasy back to scratch your itch

Deft, occasionally dazzling, light of heart and lively in spirit, Doctor Who continues to be one of the small screen's strangest anomalies. The eccentric, deliberately odd sci-fi fantasy that first aired in England in 1963 — in black and white no less — has outlived Monty Python, Red Dwarf and Hitchhiker's Guide to the Galaxy, among countless others.

Despite its playful tone and moments of obvious silliness, or perhaps because of them, it has captured the popular imagination in a way few TV serials have ever done.

And when Doctor Who returns this weekend, it will feature a new Doctor, played by Scottish-born Peter Capaldi, and the return of companion Clara Oswald, played by Jenna Coleman.

Together they will face renewed confrontations with Daleks, dark angels, mad scientists, coldly calculating cybermen and the usual rips in the space-time continuum.

Capaldi replaces Northampton, U.K., native Matt Smith who, at 28, was the youngest Doctor when he originally signed on for three seasons in 2010.

Capaldi, 56, is the oldest performer to play the famed Time Lord since William Hartnell first appeared as the Doctor on Nov. 23, 1963.

As with other recent seasons of Doctor Who, details about the new season have been kept tightly under wraps.

The season will once again air in two parts, with midseason finale Oct. 4. The remaining episodes will return in March, with the reimagined Doctor Who's milestone 100th episode to air in April.

Capaldi's Doctor is irascible and occasionally irritable, in the mould of Hartnell's original Doctor. Over time, Capaldi's Doctor develops a begrudging mutual respect with Clara, one of the few companions not intimidated by his brusque demeanour.

The season opener flashes back to Victorian London, where a seadwelling monster has taken up residence in the River Thames and is menacing the locals. The Doctor believes the monster is the vanguard of another alien invasion, and it's up to him to restore space and time once again.

Doctor Who's nemeses, the Daleks, return in the second episode, on Aug. 30.

There's a reason to Doctor Who's madness, producer and showrunner Steven Moffat said at a recent meeting of the Television Critics Association in Los Angeles. As strange as some of the stories appear to be on first viewing, there's intelligent design at work.

"It's all a master plan," Moffat said.

Moffat has been on a roll of late. His other series, Sherlock, which he co-created with Mark Gatiss, won four Emmys this past weekend, and is a contender for best miniseries when the main Emmys are handed out Aug. 25.

Doctor Who is a long way from running out of ideas, Moffat said.

Moffatt has his own theory as to why the reimagined Doctor Who has lasted as long as it has. This will be its eighth season.

"The thing about these stories is that nothing is ever a destination," he said. "It's a way station: You're going off somewhere else. Every revelation has to serve the story. Each time you think you know the truth, you realize you don't know it yet. That's what story is, I think."

A new Doctor won't dissuade viewers, Moffat says, even if Smith was one of the most popular Doctors. Change is good.

"The only way you can keep your show alive and make it vibrant is to make changes," Moffat said. "Stories are about change. The moment you say, 'We can only make Doctor Who one way,' you might as well build that tomb. It's over. My responsibility to the four-year-old who will have my job one day — and there is a four-year-old who will have my job one day —is to keep it alive and vibrant and exciting. And, yes, to do that, you make changes. And, yes, you do shocking things with the Doctor."

Caption: Peter Capaldi stars as the Doctor in Doctor Who. The new season sees him confronting a monster in Victorian London.

Caption: Peter Capaldi, left, as the Doctor and Jenna Coleman as Clara. Over time, Capaldi's Doctor develops a begrudging mutual respect with Clara.