Sci-Fi turns to media to spread its name 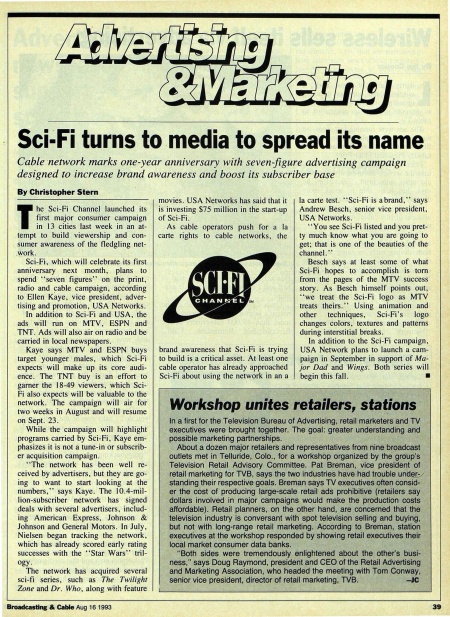 The Sci-Fi Channel launched its first major consumer campaign in 13 cities last week in an attempt to build viewership and consumer awareness of the fledgling network.

Sci-Fi, which will celebrate its first anniversary next month, plans to spend "seven figures" on the print, radio and cable campaign, according to Ellen Kaye, vice president, advertising and promotion, USA Networks.

In addition to Sci-Fi and USA, the ads will run on MTV, ESPN and TNT. Ads will also air on radio and be carried in local newspapers.

Kaye says MTV and ESPN buys target younger males, which Sci-Fi expects will make up its core audience. The TNT buy is an effort to garner the 18-49 viewers, which SciFi also expects will be valuable to the network. The campaign will air for two weeks in August and will resume on Sept. 23.

While the campaign will highlight programs carried by Sci-Fi, Kaye emphasizes it is not a tune-in or subscriber acquisition campaign.

"The network has been well received by advertisers, but they are going to want to start looking at the numbers," says Kaye. The 10.4-million-subscriber network has signed deals with several advertisers, including American Express, Johnson & Johnson and General Motors. In July, Nielsen began tracking the network, which has already scored early rating successes with the "Star Wars" trilogy.

The network has acquired several sci-fi series, such as The Twilight Zone and Dr. Who, along with feature

movies. USA Networks has said that it is investing $75 million in the start-up of Sci-Fi.

As cable operators push for a la carte rights to cable networks, the brand awareness that Sci-Fi is trying to build is a critical asset. At least one cable operator has already approached Sci-Fi about using the network in an a la carte test. "Sci-Fi is a brand," says Andrew Besch, senior vice president, USA Networks.

"You see Sci-Fi listed and you pretty much know what you are going to get; that is one of the beauties of the channel."

Besch says at least some of what Sci-Fi hopes to accomplish is torn from the pages of the MTV success story. As Besch himself points out, "we treat the Sci-Fi logo as MTV treats theirs." Using animation and other techniques, Sci-Fi's logo changes colors, textures and patterns during interstitial breaks.

In addition to the Sci-Fi campaign, USA Network plans to launch a campaign in September in support of Major Dad and Wings. Both series will begin this fall.