Sci-fi fans guess 'Who' at confab 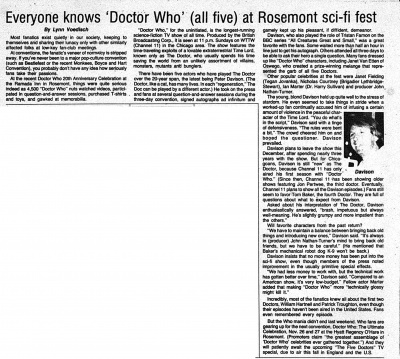 alternate version from the Suburban Sun-Times 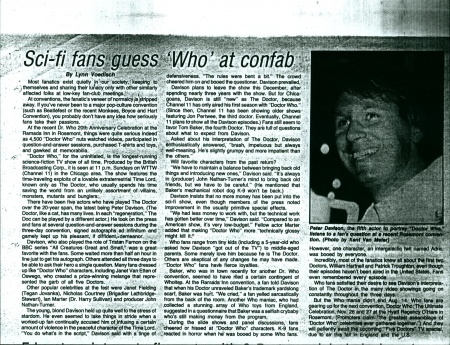 Most fanatics exist quietly in our society, keeping to themselves and sharing their lunacy only with other similarly affected folks at low-key fan-club meetings.

At conventions, the fanatic's veneer of normalcy is stripped away. If you've never been to a major pop-culture convention (such as Beatlefest or the recent Monkees, Boyce and Hart Convention), you probably don't have any idea how seriously fans take their passions.

At the recent Dr. Who 20th Anniversary Celebration at the Ramada Inn in Rosemont, things were quite serious indeed as 4,500 "Doctor Who" nuts watched videos, participated in question-and-answer sessions, purchased T-shirts and, toys, and gawked at memorabilia.

"Doctor Who," for the uninitiated, is the longest-running science-fiction TV show of all time. Produced by the British Broadcasting Corp., it is seen at 11 p.m. Sundays on WTTW (Channel 11) in the Chicago area. The show features the time-traveling exploits of a lovable extraterrestrial Time Lord, known only as The Doctor, who usually spends his time saving the world from an unlikely assortment of villains, monsters, mutants and bunglers.

There have been five actors who have played The Doctor over the 20-year span, the latest being Peter Davison. (The Doctor, like a cat, has many lives. In each "regeneration," The Doc can be played by a different actor.) He took on the press and fans at several question-and-answer sessions during the three-day convention, signed autographs ad infinitum and gamely kept up his pleasant, if diffident, demeanor.

Davison, who also played the role of Tristan Farnon on the BBC series "All Creatures Great and Small," was a great favorite with the fans. Some waited more than half an hour in line just to get his autograph. Others attended all three days to be able to ask their hero a single question. Many fans dressed up like "Doctor Who" characters, including Janet Van Etten of Oswego, who created a prize-winning melange that represented the garb of all five Doctors.

The young, blond Davison held up quite well to the stress of stardom. He even seemed to take things in stride when a worked-up fan continually accused him of infusing a certain amount of violence in the peaceful character of the Time Lord. "You do what's in the script," Davison said with a tinge of defensiveness. "The rules were bent a bit." The crowd cheered him on and booed the questioner. Davison prevailed.

Davison plans to leave the show this December, after spending nearly three years with the show. But for Chicagoans, Davison is still "new" as The Doctor, because Channel 11 has only aired his first season with "Doctor Who." (Since then, Channel 11 has been showing older shows featuring Jon Pertwee, the third doctor. Eventually, Channel 11 plans to show all the Davison episodes.) Fans still seem to favor Tom Baker, the fourth Doctor. They are full-of questions about what to expect from Davison.

Asked about his interpretation of The Doctor, Davison enthusiastically answered, "brash, impetuous but always well-meaning. He's slightly grumpy and more impatient than the others."

Will favorite characters from the past return?

"We have to maintain a balance between bringing back old things and introducing new ones," Davison said. "It's always in (producer) John Nathan-Turner's mind to bring back old friends, but we have to be careful." (He mentioned that Baker's mechanical robot dog K-9 won't be back.)

Davison insists that no more money has been put into the sci-fi show, even though members of the press noted improvement in the usually primitive special effects.

"We had less money to work with, but the technical work has gotten better over time," Davison said. "Compared to an American show, it's very low-budget." Fellow actor Marter added that making "Doctor Who" more "technically glossy might kill it."

Who fans range from tiny kids (including a 5-year-old who asked how Davison "got out of the TV") to middle-aged parents. Some merely love him because he is The Doctor. Others are skeptical of any changes he may have made. "Doctor Who" fans have fierce loyalties.

Baker, who was in town recently for another Dr. Who convention, seemed to have riled a certain contingent of Whoites. At the Ramada Inn convention, a fan told Davison that when his Doctor unraveled Baker's trademark yardslong scarf, Baker was hui.t. "We cried," a fan yelled sarcastically from the back of the room. Another Who maniac, who had collected a stunning array of Who toys from England, suggested in a questionnaire that Baker was a selfish crybaby who's still making money from the program.

During the slide shows and panel discussions, fans cheered or hissed at "Doctor Who" characters. K-9 fans reacted in horror when he was booed by some Who fans. However, one character, an intergalactic twit named Adric, was booed by everyone.

Incredibly, most of the fanatics knew all about the first two Doctors, William Hartnell and Patrick Troughton, even though their episodes haven't been aired in the United States. Fans even remembered every episode.

Who fans satisfied their desire to see Davison's interpretation of The Doctor in the many video showings going on constantly throughout the three days.

But the Who Mania didn't end Aug. 14. Who fans are gearing up for the next convention, Doctor Who: The Ultimate Celebration, Nov. 26 and 27 at the Hyatt Regency O'Hare in Rosemont.' (Promoters claim the greatest assemblage of 'Doctor Who' celebrities ever gathered together.') And will patiently await the upcoming "Five Doctors" TV special due to air this fall in England and the U.S.