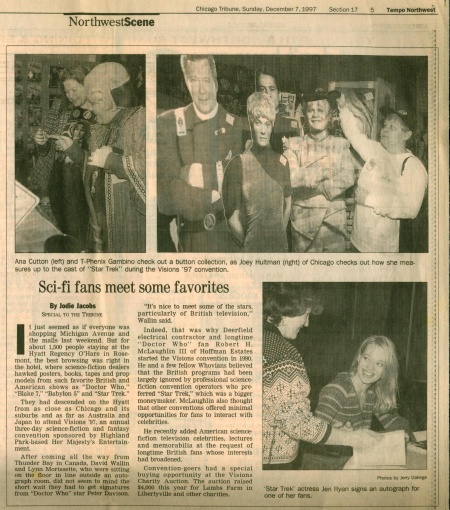 It just seemed as if everyone was hopping Michigan Avenue and the malls last weekend. But for about 1,500 people staying at the Hyatt Regency O'Hare in Rosemont, the best browsing was right in the hotel, where science-fiction dealers hawked posters, books, tapes and prop models from such favorite British and American shows as "Doctor Who," "Blake 7," "Babylon 5" and "Star Trek."

They had descended on the Hyatt from as close as Chicago and its suburbs and as far as Australia and Japan to attend Visions '97, an annual three-day science-fiction and fantasy convention sponsored by Highland Park-based Her Majesty's Entertainment.

After coming all the way from Thunder Bay in Canada, David Wallin and Lynn Morissette, who were sitting on the floor in line outside an autograph room, did not seem to mind the short wait they had to get signatures from "Doctor Who" star Peter Davison.

"It's nice to meet some of the stars, particularly of British television," Wallin said.

Indeed, that was why Deerfield electrical contractor and longtime "Doctor Who" fan Robert H. McLaughlin III of Hoffman Estates started the Visions convention in 1990. He and a few fellow Whovians believed that the British programs had been largely ignored by professional science-fiction convention operators who preferred "Star Trek," which was a bigger moneymaker. McLaughlin also thought that other conventions offered minimal opportunities for fans to interact with celebrities.

He recently added American science-fiction television celebrities, lectures and memorabilia at the request of longtime British fans whose interests had broadened.

Convention-goers had a special buying opportunity at the Visions Charity Auction. The auction raised $4,000 this year for Lambs Farm in Libertyville and other charities.

Caption: 'Star Trek' actress Jeri Ryan signs an autograph for one of her fans.

Caption: Ana Cutton (left) and T-Phenix Gambino check out a button collection, as Joey Hultman (right) of Chicago checks out how she measures up to the cast of "Star Trek" during the Visions '97 convention.