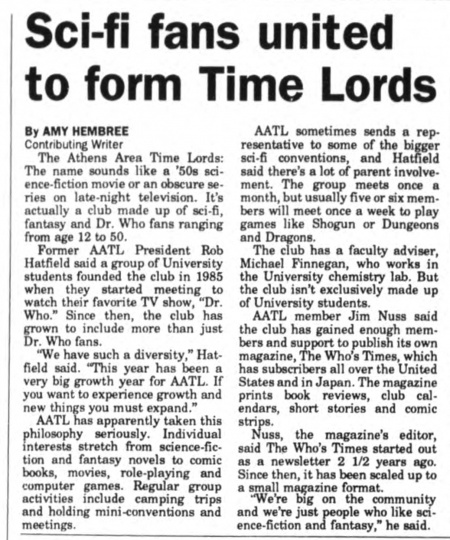 The Athens Area Time Lords: The name sounds like a '50s science-fiction movie or an obscure series on late-night television. It's actually a club made up of sci-fi, fantasy and Dr. Who fans ranging from age 12 to 50.

Former AATL President Rob Hatfield said a group of University students founded the club in 1985 when they started meeting to watch their favorite TV show, "Dr. Who." Since then, the club has grown to include more than just Dr. Who fans.

"We have such a diversity," Hatfield said. 'This year has been a very big growth year for AATL. If you want to experience growth and new things you must expand."

AATL sometimes sends a representative to some of the bigger sci-fi conventions, and Hatfield said there's a lot of parent involvement. The group meets once a month, but usually five or six members will meet once a week to play games like Shogun or Dungeons and Dragons.

The club has a faculty adviser, Michael Finnegan, who works in the University chemistry lab. But the club isn't exclusively made up of University students.

AATL member Jim Nuss said the club has gained enough members and support to publish its own magazine, The Who's Times, which has subscribers all over the United States and in Japan. The magazine prints book reviews, club calendars, short stories and comic strips.

Nuss, the magazine's editor, said The Who's Times started out as a newsletter 2 1/2 years ago. Since then, it has been scaled up to a small magazine format.

'We're big on the community and we're just people who like science-fiction and fantasy," he said.