Science fiction fan has a date with the Doctor 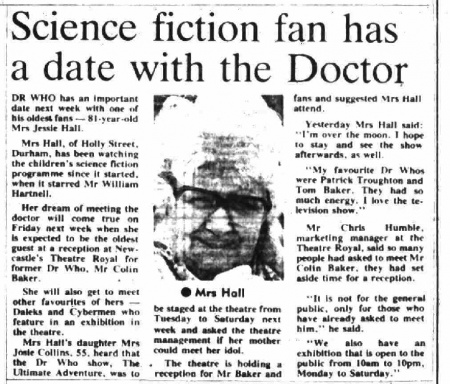 DR WHO has are important date next week with one of his oldest fans-81-year-old Mrs Jessie Hall.

Mrs Hall, of Holly Street, Durham, has been watching the children's science fiction programme since it started, when it starred Mr William Hartnell.

Her dream of meeting the doctor will come true on Friday neat week when she is expected to be the oldest guest at a reception at Newcastle's Theatre Royal for former Dr Who, Mr Colin Baker.

She will also get to meet other favourites of hers-Daleks and cybermen who feature in an exhibition in the theatre.

Mrs Hall's daughter Mrs Josie Collins, 55, heard that the Dr Who show, The Ultimate Adventure, was to be staged at the theatre from Tuesday to Saturday next week and asked the theatre management if her mother could meet her idol.

The theatre is holding a reception for Mr Baker and fans and suggest Mrs Hall attend.

Yesterday Mrs Hall said: "I'm over the moon. I hope to stay and see the show afterwards, as well.

"My favourite Dr Whos were Patrick Troughton and Tom Baker. They had so much energy. I love the television show."

Mr Chris Humble, marketing manager at the Theatre Royal, said so many people had asked to meet Mr Colin Baker, they had set aside time for a reception.

"It is not for the general public, only for those who have already asked to meet him," he said.

"We also have an exhibition that is open to the public from 10am to 10pm, Monday to Saturday."