Season 5 of 'Doctor Who' brings new slate of actors 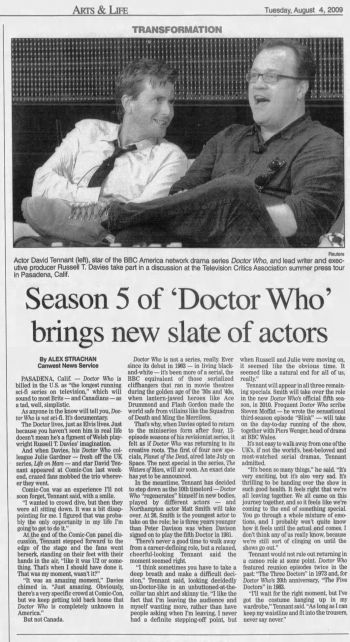 PASADENA, Calif. — Doctor Who is billed in the U.S. as "the longest running sci-fi series on television," which will sound to most Brits — and Canadians — as a tad, well, simplistic.

And when Davies, his Doctor Who colleague Julie Gardner — fresh off the UK series, Life on Mars — and star David Tennant appeared at Comic-Con last weekend, crazed fans mobbed the trio wherever they went.

Comic-Con was an experience I'll not soon forget, Tennant said, with a smile.

"I wanted to crowd dive, but then they were all sitting down. It was a bit disappointing for me. I figured that was probably the only opportunity in my life I'm going to get to do it."

At the end of the Comic-Con panel discussion, Tennant stepped forward to the edge of the stage and the fans went berserk, standing on their feet with their hands in the air, "like it was U2 or something. That's when I should have done it. That was my moment, wasn't it?"

"It was an amazing moment," Davies chimed in. "Just amazing. Obviously, there's a very specific crowd at Comic-Con, but we keep getting told back home that Doctor Who is completely unknown in America."

Doctor Who is not a series, really. Ever since its debut in 1963 — in living black-and-white — it's been more of a serial, the BBC equivalent of those serialized cliffhangers that ran in movie theatres during the golden age of the '30s and '40s, when lantern-jawed heroes like Ace Drummond and Flash Gordon made the world safe from villains like the Squadron of Death and Ming the Merciless.

That's why, when Davies opted to return to the miniseries form after four, 13-episode seasons of his revisionist series, it felt as if Doctor Who was returning to its creative roots. The first of four new specials, Planet of the Dead, aired late July on Space. The next special in the series, The Waters of Mars, will air soon. An exact date has yet to be announced.

In the meantime, Tennant has decided to step down as the 10th timelord — Doctor Who "regenerates" himself in new bodies, played by different actors — and Northampton actor Matt Smith will take over. At 26, Smith is the youngest actor to take on the role; he is three years younger than Peter Davison was when Davison signed on to play the fifth Doctor in 1981.

Tennant will appear in all three remaining specials. Smith will take over the role in the new Doctor Who's official fifth season, in 2010. Frequent Doctor Who scribe Steven Moffat — he wrote the sensational third-season episode "Blink" — will take on the day-to-day running of the show, together with Piers Wenger, head of drama at BBC Wales.

It's not easy to walk away from one of the UK's, if not the world's, best-beloved and most-watched serial dramas, Tennant admitted.

"It's been so many things," he said. "It's very exciting, but it's also very sad. It's thrilling to be handing over the show in such good health. It feels right that we're all leaving together. We all came on this journey together, and so it feels like we're coming to the end of something special. You go through a whole mixture of emotions, and I probably won't quite know how it feels until the actual end comes. I don't think any of us really know, because we're still sort of clinging on until the shows go out."

Tennant would not rule out returning in a cameo role at some point. Doctor Who featured reunion episodes twice in the past: "The Three Doctors" in 1973 and, for Doctor Who's 20th anniversary, "The Five Doctors" in 1983.

"I'll wait for the right moment, but I've got the costume hanging up in my wardrobe," Tennant said. "As long as I can keep my waistline and fit into the trousers, never say never."