Second 'time' around for Jon 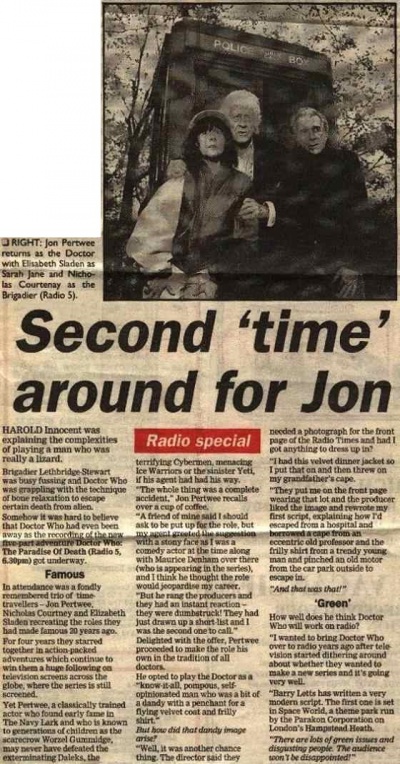 Harold Innocent was explaining the complexities of playing a man who was really a lizard.

Brigadier Lethbridge Stewart was busy fussing and Doctor Who was grappling with the technique of bone relaxation to escape certain death from alien.

Somehow it was hard to believe that Doctor Who had been even been away as the recording of the new five-part adventure Doctor Who: The Paradise of Death (Radio 5, 6.30pm) got underway.

In attendance was a fondly remembered trio of time travellers Jon Pertwee, Nicholas Courtney and Elisabeth Sladen recreating the roles that made famous 20 years ago.

For four years they starred together in the action-packed adventures which continued to win them a huge following on television screens across the globe, where the series is still screened.

Yet Pertwee, a classically trained actor who found early fame in The Navy Lark and who is known to generations of children as the scarecrow Worzel Gummidge, may have never defeated the exterminating Daleks, the terrifying Cybermen, menacing Ice Warriors or the sinister Yeti, if his agent had had his way.

"The whole thing was a complete accident," Jon Pertwee recalls over a cup of coffee.

"A friend of mine said I should ask to be put up for the role, but my agent greeted the suggestion with a stony face as I was a comedy actor at the time along with Maurice Denham over there (who was appearing in the series), and I think he thought the role would jeopardize my career.

"But he ran the producers and they had an instant reaction they were dumb struck! They had just drawn up a shortlist and I was the second one to call.

Delighted with the offer, Pertwee preceded to make the role his own in the tradition of all doctors.

He opted to play the Doctor as a "know-it-all, pompous, self-opinionated man who was a bit of a dandy it with a penchant for a flying fell that coat and frilly shirt."

But how did that dandy image arise?

"Well, it was another chance thing. The director said they needed a photograph for the front page of the Radio Times and had I got anything to dress up in?

"I had this velvet dinner jacket so I put that on and then threw on my grandfather's cape.

"They put me on the front page wearing that lot and the producer liked the image and rewrote my first script, explaining how I'd escaped from a hospital and that a cape from an eccentric old professor and the frilly shirt from a trendy young man and pinched an old motor from the car park outside to escape in.

"And that was that!"

How well does he think Doctor Who will work on radio?

"I wanted to bring Doctor Who over to radio years ago after television started dithering around about whether they wanted to make a new series and it's going very well.

"Barry Letts has written a very modern script. The first one is set in Space World, a theme park run by the Parkon Corporation on London's Hampstead Heath.

There are lots of green issues and disgusting people. The audience won't be disappointed!

Caption: Right: Jon Pertwee returns as the Dr. with Elisabeth Sladen as Sarah Jane and Nicholas Courtney as the Brigadier (Radio 5)