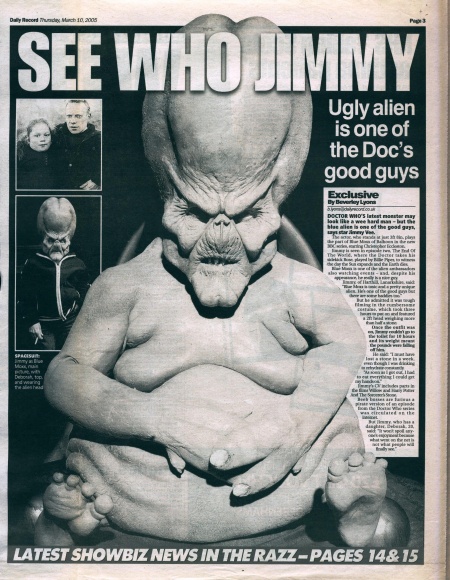 Ugly alien vis one of the Doc's good guys

DOCTOR WHO'S latest monster may look like a wee hard man - but the blue alien is one of the good guys, says star Jimmy Vee.

The actor, who stands at just 3ft 8in, plays the part of Blue Moxx of Balhoon in the new BBC series, starring Christopher Eccleston. Jimmy is seen in episode two, The End Of The World, where the Doctor takes his sidekick Rose, played by Billie Piper, to witness the day the Sun expands and the Earth dies. Blue Moxx is one of the alien ambassadors also watching events - and, despite his appearance, he really is a nice guy Jimmy, of Harthill, Lanarkshire, said: "Blue Moxx is toxic and a pretty unique alien. He's one of the good guys but there are some baddies too." But he admitted it was tough filming in the cumbersome costume, which took three hours to put on and featured a 2ft head weighing more than half a stone.

Once the outfit was on, Jimmy couldn't go to the toilet for 10 hours and its weight meant the pounds were falling off him.

He said: "I must have lost a stone in a week, even though I was drinking to rehydrate constantly. "As soon as I got out, I had to eat everything I could get my hands on."

Jimmy's CV includes parts in the films Willow and Harry Potter And The Sorcerer's Stone.

Beeb bosses are furious a pirate version of an episode from the Doctor Who series was circulated on the - internet.

But Jimmy, who has a daughter, Deborah, 20, said: "It won't spoil anyone's enjoyment because what went on the net is not what people will finally see."