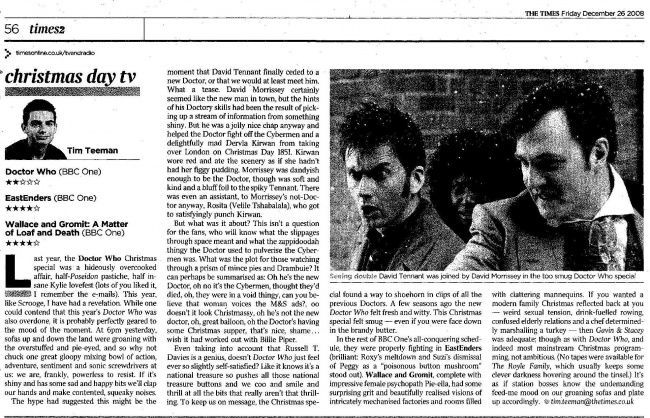 Last year, the Doctor Who Christmas special was a hideously overcooked affair, half-Poseidon pastiche, half insane Kylie lovefest (lots of you liked it, I remember the e-mails). This year, like Scrooge, I have had a revelation. While one could contend that this year's Doctor Who was also overdone, it is probably perfectly geared to the mood of the moment. At 6pm yesterday, sofas up and down the land were groaning with the overstuffed and pie-eyed, and so why not chuck one great gloopy mixing bowl of action, adventure, sentiment and sonic screwdrivers at us: we are, frankly, powerless to resist. If it's shiny and has some sad and happy bits we'll clap our hands and make contented, squeaky noises.

The hype had suggested this might be the moment that David Tennant finally ceded to a new Doctor, or that we would at least meet him. What a tease. David Morrissey certainly seemed like the new man in town, but the hints of his Doctory skills had been the result of picking up a stream of information from something shiny. But he was a jolly nice chap anyway and helped the Doctor fight off the Cybermen and a delightfully mad Dervla Kirwan from taking over London on Christmas Day 1851. Kirwan wore red and ate the scenery as if she hadn't had her Piggy pudding. Morrissey was dandyish enough to be the Doctor, though was soft and kind and a bluff foil to the spiky Tennant. There was even an assistant, to Morrissey's not-Doctor anyway, Rosita (Velile Tshabalala), who got to satisfyingly punch Kirwan.

But what was it about? This isn't a question for the fans, who will know what the slippages through space meant and what the zappidoodah thingy the Doctor used to pulverise the Cyber-men was. What was the plot for those watching through a prism of mince pies and Drambuie? It can perhaps be summarised as: Oh he's the new Doctor, oh no it's the Cybermen, thought they'd died, oh, they were in a void thingy, can you believe that woman voices the M&S ads?, oo doesn't it look Christmassy, oh he's not the new doctor, oh, great balloon, oh the Doctor's having some Christmas supper, that's nice, shame... wish it had worked out with Billie Piper.

Even taking into account that Russell T. Davies is a genius, doesn't Doctor Who just feel ever so slightly self-satisfied? Like it knows it's a national treasure so pushes all those national treasure buttons and we coo and smile and thrill at all the bits that really aren't that thrilling To keep us on message, the Christmas special found a way to shoehorn in clips of all the previous Doctors. A few seasons ago the new Doctor Who felt fresh and witty. This Christmas special felt smug — even if you were face down in the brandy butter.

Caption: Seeing double: David Tennant was joined by David Morrissey in the too smug Doctor Who special