Selling out and alienating everyone 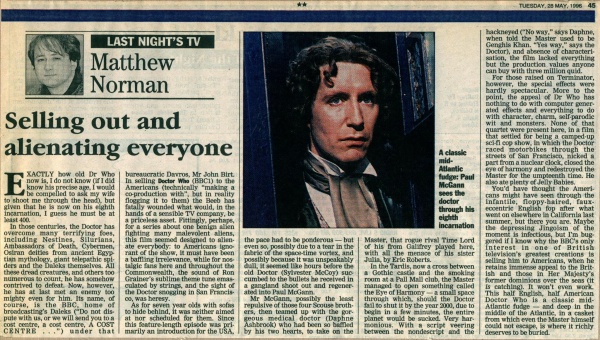 Selling out and alienating everyone

EXACTLY how old Dr Who now is, I do not know (if I did know his precise age, I would be compelled to ask my wife to shoot me through the head), but given that he is now on his eighth incarnation, I guess he must be at least 400.

In those centuries, the Doctor has overcome many terrifying foes, including Nestines, Silurians, Ambassadors of Death, Cybermen, Osiran deities from ancient Egyptian mythology, giant telepathic spiders and the Daleks themselves. All these dread creatures, and others too numerous to count, he has somehow contrived to defeat. Now, however, he has at last met an enemy too mighty even for him. Its name, of course, is the BBC, home of broadcasting's Daleks ("Do not dispute with us, or we will send you to a cost centre, a cost centre, A COST CENTRE ...") under that bureaucratic Davros, Mr John Birt. In selling Doctor Who (BBC1) to the Americans (technically "making a co-production with", but in reality flogging it to them) the Beeb has fatally wounded what would, in the hands of a sensible TV company, be a priceless asset. Fittingly, perhaps, for a series about one benign alien fighting many malevolent aliens, this film seemed designed to alienate everybody: to Americans ignorant of the show, it must have been a baffling irrelevance, while for nostalgic fans here and throughout the Commonwealth, the sound of Ron Grainer's sublime theme tune emasculated by strings, and the sight of the Doctor snogging in San Francisco, was heresy.

As for seven year olds with sofas to hide behind, it was neither aimed at nor scheduled for them. Since this feature-length episode was primarily an introduction for the USA, the pace had to be ponderous — but even so, possibly due to a tear in the fabric of the space-time vortex, and possibly because it was unspeakably dull, it seemed like hours before the old Doctor (Sylvester McCoy) succumbed to the bullets he received in a gangland shoot out and regenerated into Paul McGann.

Mr McGann, possibly the least repulsive of those four Scouse brothers, then teamed up with the gorgeous medical doctor (Daphne Ashbrook) who had been so baffled by his two hearts, to take on the A classic mid-Atlantic fudge: Paul McGann sees the doctor through his eighth incarnation

Master, that rogue rival Time Lord of his from Galifrey played here, with all the menace of his sister Julia, by Eric Roberts.

In the Tardis, now a cross between a Gothic castle and the smoking room at a Pall Mall club, the Master managed to open something called the Eye of Harmony — a small space through which, should the Doctor fail to shut it by the year 2000, due to begin in a few minutes, the entire planet would be sucked. Very harmonious. With a script veering between the nondescript and the hackneyed ("No way," says Daphne, when told the Master used to be Genghis Khan. "Yes way," says the Doctor), and absence of characterisation, the film lacked everything but the production values anyone can buy with three million quid.

For those raised on Terminator, however, the special effects were hardly spectacular. More to the point, the appeal of Dr Who has nothing to do with computer generated effects and everything to do with character, charm, self-parodic wit and monsters. None of that quartet were present here, in a film that settled for being a camped-up sci-fi cop show, in which the Doctor raced motorbikes through the streets of San Francisco, nicked a part from a nuclear clock, closed the eye of harmony and redestroyed the Master for the umpteenth time. He also ate plenty of Jelly Babies.

You'd have thought the Americans might have seen through the infantile, floppy-haired, faux-eccentric English fop after what went on elsewhere in California last summer, but there you are. Maybe the depressing Jingoism of the moment is infectious, but I'm buggered if I know why the BBC's only interest in one of British television's greatest creations is selling him to Americans, when he retains immense appeal to the British and those in Her Majesty's former dominions over the seas (it is catching). It won't even work. This half English, half American Doctor Who is a classic mid-Atlantic fudge — and deep in the middle of the Atlantic, in a casket from which even the Master himself could not escape, is where it richly deserves to be buried.