Send for the Doctor! 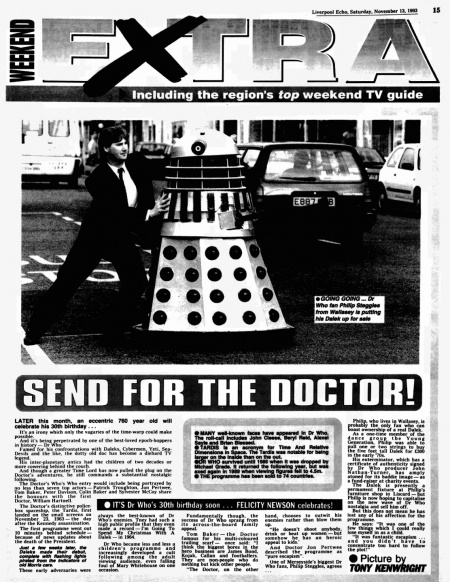 LATER this month, an eccentric 760 year old will celebrate his 30th birthday ...

It's an irony which only the vagaries of the time-warp could make possible.

And it's being perpetrated by one of the best-loved epoch-hoppers in history — Dr Who.

Famed for his confrontations with Daleks, Cybermen, Yeti, Sea-Devils and the like, the dotty old doc has become a diehard TV legend.

His inter-planetary antics had the children of two decades or more cowering behind the couch.

And though a greater Time Lord has now pulled the plug on the Doctor's adventures, he still commands a substantial nostalgic following.

The Doctor's distinctive police-box spaceship, the Tardis, first landed on the small screens on November 23, 1963 — the day after the Kennedy assassination. The first programme went out 10 minutes behind schedule —because of news updates about the death of the President.

Just a few weeks later, the Daleks mode their debut, complete with flashing lights from the indicators of old Morris cars.

These early adversaries were always the best-known of Dr Who's enemies. They had such a high public profile that they even made a record — I'm Going To Spend My Christmas With A Dalek — in 1964.

Dr Who became less and less a children's programme and increasingly developed a cult following among the adult viewing audience, even falling foul of Mary Whitehouse on one occasion.

Fundamentally though, the success of Dr Who sprang from its across-the-board family appeal.

Tom Baker—the Doctor famous for his multi-coloured trailing scarf — once said: "I think the biggest bores in the hero business are James Bond, Kojak, Callan and footballers. They are non-people who do nothing but kick other people. "The Doctor, on the other hand, chooses to outwit his enemies rather than blow them up.

"He doesn't shoot anybody. drink or beat up women—but somehow he has an heroic appeal to kids."

And Doctor Jon Pertwee described the programme as "pure escapism".

One of Merseyside's biggest Dr Who fans, Philip Steggles, agrees ...

Philip, who lives in Wallasey, is probably the only fan who can boast ownership of a real Dalek.

As a one-time member of the dance group the Young Generation, Philip was able to pull one or two strings to buy the five feet tall Dalek for £300 in the early '70s.

His exterminator, which has a certificate of authenticity signed by Dr Who producer John Nathan-Turner, has amply atoned for its baddie image—as a fund-raiser at charity events.

The Dalek is presently a permanent fixture at Philip's furniture shop in Liscard — but Philip is now hoping to capitalise on the new wave of Dr Who nostalgia and sell him off.

But this does not mean he has lost any of his affection for the programme.

He says: "It was one of the few things which I could really lose myself in as a child.

"It was fantastic escapism ... and you didn't have to concentrate too hard to follow the plot!"

Caption: GOING GOING ... Dr Who fan Philip Staggles from Wallasey is putting his Dalek up for sale