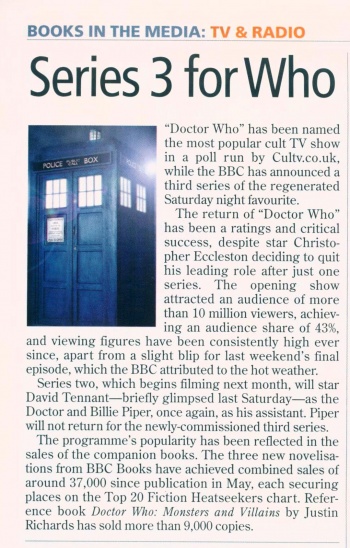 "Doctor Who" has been named the most popular cult TV show in a poll run by Cultv.co.uk, while the BBC has announced a third series of the regenerated Saturday night favourite.

The return of "Doctor Who" has been a ratings and critical success, despite star Christopher Eccleston deciding to quit his leading role after just one series. The opening show attracted an audience of more than 10 million viewers, achieving an audience share of 43%, and viewing figures have been consistently high ever since, apart from a slight blip for last weekend's final episode, which the BBC attributed to the hot weather.

Series two, which begins filming next month, will star David Tennant—briefly glimpsed last Saturday—as the Doctor and Billie Piper, once again, as his assistant. Piper will not return for the newly-commissioned third series.

The programme's popularity has been reflected in the sales of the companion books. The three new novelisations from BBC Books have achieved combined sales of around 37,000 since publication in May, each securing places on the Top 20 Fiction Heatseekers chart. Reference book Doctor Who: Monsters and Villains by Justin Richards has sold more than 9,000 copies.