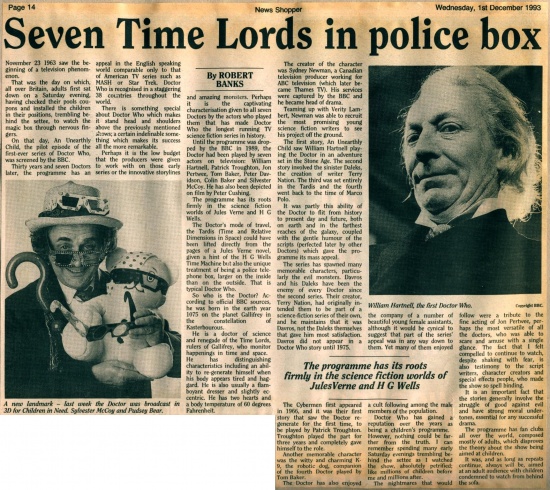 November 23 1963 saw the beginning of a television phenomenon.

That was the day on which, all over Britain, adults first sat down on a Saturday evening, having checked their pools coupons and installed the children in their positions, trembling behind the settee, to watch the magic box through nervous fingers.

On that day, An Unearthly Child, the pilot episode of the first-ever series of Doctor Who, was screened by the BBC.

Thirty years and seven Doctors later, the programme has an appeal in the English speaking world comparable only to that of American TV series such as MASH or Star Trek. Doctor Who is recognised in a staggering 38 countries throughout the world.

There is something special about Doctor Who which makes it stand head and shoulders above the previously mentioned shows; a certain indefinable something which makes its success all the more remarkable.

Perhaps it is the low budget that the producers were given to work with on those early series or the innovative storylines and amazing monsters. Perhaps it is the captivating characterisation given to all seven Doctors by the actors who played them that has made Doctor Who the longest running TV science fiction series in history.

Until the programme was dropped by the BBC in 1989, the Doctor had been played by seven actors on television: William Hartnell, Patrick Troughton, Jon Pertwee. Tom Baker, Peter Davidson, Colin Baker and Silvester McCoy. He has also been depicted on film by Peter Cushing.

The Doctor's mode of travel, the Tardis (Time and Relative Dimensions in Space) could have been lifted directly from the pages of a Jules Verne novel, given a hint of the H G Wells Time Machine but also the unique treatment of being a police telephone box, larger on the inside than on the outside. That is typical Doctor Who.

So who is the Doctor? According to official BBC sources, he was born in the earth year 1075 on the planet Gallifrey in the constellation of Kasterbourous.

He is a doctor of science and renegade of the Time Lords, rulers of Gallifrey, who monitor happenings in time and space. He has distinguishing characteristics including an ability to re-generate himself when his body appears tired and haggard. He is also usually a flamboyant dresser and slightly eccentric. He has two hearts and a body temperature of 60 degrees Fahrenheit.

The creator of the character was Sydney Newman, a Canadian television producer working for ABC television (which later became Thames TV). His services were captured by the BBC and he became head of drama.

Teaming up with Verity Lambert, Newman was able to recruit the most promising young science fiction writers to see his project off the ground.

The first story, An Unearthly Child saw William Hartnell playing the Doctor in an adventure set in the Stone Age. The second story involved the sinister Daleks, the creation of writer Terry Nation. The third was set entirely in the Tardis and the fourth went back to the time of Marco Polo.

It was partly this ability of the Doctor to flit from history to present day and future, both on earth and in the farthest reaches of the galaxy, coupled with the gentle humour of the scripts (perfected later by other Doctors) which gave the programme its mass appeal.

The series has spawned many memorable characters, particularly the evil monsters. Davros and his Daleks have been the enemy of every Doctor since the second series. Their creator, Terry Nation, had originally intended them to be part of a science-fiction series of their own, and he maintains that it was Davros, not the Daleks themselves that gave him most satisfaction. Davros did not appear in a Doctor Who story until 1975.

The Cybermen first appeared in 1966, and it was their first story that saw the Doctor regenerate for the first time, to be played by Patrick Troughton. Troughton played the part for three years and completely gave himself to the role.

Another memorable character was the witty and charming K9, the robotic dog, companion of the fourth Doctor played by Tom Baker.

The Doctor has also enjoyed the company of a number of beautiful young female assistants, although it would be cynical to suggest that part of the series' appeal was in any way down to them. Yet many of them enjoyed a cult following among the male members of the population.

Doctor Who has gained a reputation over the years as being a children's programme. However, nothing could be farther from the truth. I can remember spending many early Saturday evenings trembling behind the settee as I watched the show, absolutely petrified; like millions of children before me and millions after.

The nightmares that would follow were a tribute to the fine acting of Jon Pertwee, perhaps the most versatile of all the doctors, who was able to scare and amuse with a single glance. The fact that I felt compelled to continue to watch, despite shaking with fear, is also testimony to the script writers, character creators and special effects people, who made the show so spell binding.

It is an important fact that the stories generally involve the struggle of good against evil and have strong moral undertones, essential for any successful drama.

The programme has fan clubs all over the world, composed mostly of adults, which disproves the theory about the show being aimed at children.

It was, and as long as repeats continue, always will be, aimed at an adult audience with children condemned to watch from behind the sofa.

A new landmark - last week the Doctor was broadcast in 3D for Children in Need. Sylvester McCoy and Pudsey Bear.