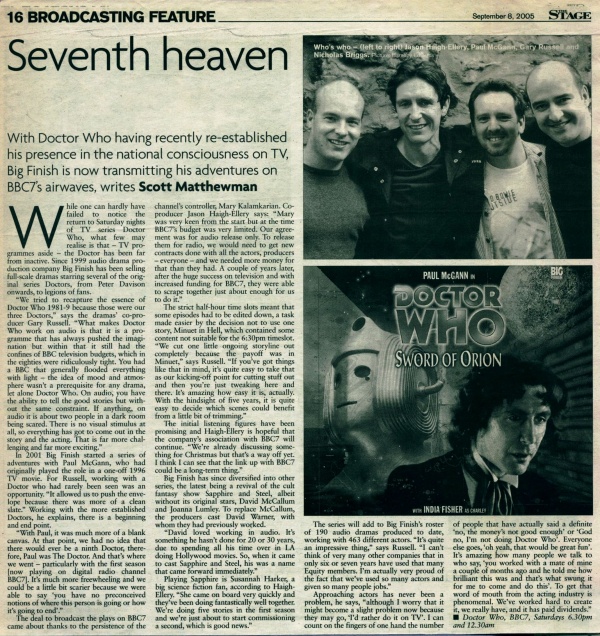 With Doctor Who having recently re-established his presence in the national consciousness on TV, Big Finish is now transmitting his adventures on BBC7's airwaves, writes Scott Matthewman

While one can hardly have failed to notice the return to Saturday nights of TV series Doctor Who, what few may realise is that — TV programmes aside — the Doctor has been far from inactive. Since 1999 audio drama production company Big Finish has been selling full-scale dramas starring several of the original series Doctors, from Peter Davison onwards, to legions of fans.

"We tried to recapture the essence of Doctor Who 1981-9 because those were our three Doctors," says the dramas' co-producer Gary Russell. "What makes Doctor Who work on audio is that it is a programme that has always pushed the imagination but, within that it still had the confines of BBC television budgets, which in the eighties were ridiculously tight. You had a BBC that generally flooded everything with light — the idea of mood and atmosphere wasn't a prerequisite for any drama, let alone Doctor Who. On audio, you have the ability to tell the good stories but without the same constraint. If anything, on audio it is about two people in a dark room being scared. There is no visual stimulus at all, so everything has got to come out in the story and the acting. That is far more challenging and far more exciting."

In 2001 Big Finish started a series of adventures with Paul McGann, who had originally played the role in a one-off 1996 TV movie. For Russell, working with a Doctor who had rarely been seen was an opportunity. "It allowed us to push the envelope because there was more of a clean slate." Working with the more established Doctors, he explains, there is a beginning and end point.

"With Paul, it was much more of a blank canvas. At that point, we had no idea that there would ever be a ninth Doctor, therefore, Paul was The Doctor. And that's where we went — particularly with the first season [now playing on digital radio channel BBC7]. It's much more freewheeling and we could be a little bit scarier because we were able to say 'you have no preconceived notions of where this person is going or how it's going to end'."

The deal to broadcast the plays on BBC7 came about thanks to the persistence of the channel's controller Mary Kalamkarian. Co-producer Jason Haigh-Ellery says: "Mary was very keen from the start but at the time BBC7's budget was very limited. Our agreement was for audio release only. To release them for radio, we would need to get new contracts done with all the actors, producers — everyone — and we needed more money for that than they had. A couple of years later, after the huge success on television and with increased funding for BBC7, they were able to scrape together just about enough for us to do it."

The strict half-hour time slots meant that some episodes had to be edited down, a task made easier by the decision not to use one story, Minuet in Hell, which contained some content not suitable for the 6:30pm timeslot. "We cut one little ongoing storyline out completely because the payoff was in Minuet," says Russell. "If you've got things like that in mind, it's quite easy to take that as our kicking-off point for cutting stuff out and then you're just tweaking here and there. It's amazing how easy it is, actually. With the hindsight of five years, it is quite easy to decide which scenes could benefit from a little bit of trimming."

The initial listening figures have been promising and Haigh-Ellery is hopeful that the company's association with BBC7 will continue. "We're already discussing something for Christmas but that's a way off yet. I think I can see that the link up with BBC7 could be a long-term thing."

Big Finish has since diversified into other series, the latest being a revival of the cult fantasy show Sapphire and Steel, albeit without its original stars, David McCallum and Joanna Lumley. To replace McCallum, the producers cast David Warner, with whom they had previously worked.

"David loved working in audio. It's something he hasn't done for 20 or 30 years, due to spending all his time over in LA doing Hollywood movies. So, when it came to cast Sapphire and Steel, his was a name that came forward immediately."

Playing Sapphire is Susannah Harker, a big science fiction fan, according to Haigh-Ellery. "She came on board very quickly and they've been doing fantastically well together. We're doing five stories in the first season and we're just about to start commissioning a second, which is good news."

The series will add to Big Finish's roster of 190 audio dramas produced to date, working with 463 different actors. "It's quite an impressive thing," says Russell. "I can't think of very many other companies that in only six or seven years have used that many Equity members. I'm actually very proud of the fact that we've used so many actors and given so many people jobs."

Approaching actors has never been a problem, he says, "although I worry that it might become a slight problem now because they may go, 'I'd rather do it on TV'. I can count on the fingers of one hand the number of people that have actually said a definite 'no, the money's not good enough' or 'God no, I'm not doing Doctor Who'. Everyone else goes, 'oh yeah, that would be great fun'. It's amazing how many people we talk to who say, 'you worked with a mate of mine a couple of months ago and he told me how brilliant this was and that's what swung it for me to come and do this'. To get that word of mouth from the acting industry is phenomenal. We've worked hard to create it, we really have, and it has paid dividends."