Sex Change for Dr Who! 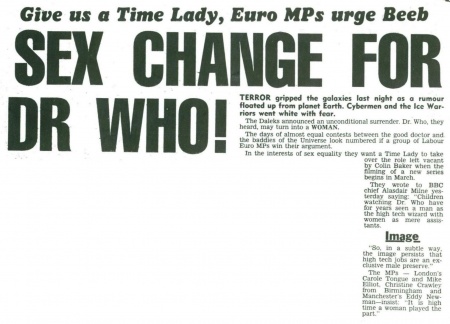 Sex Change For Dr Who!

TERROR gripped the galaxies last night as a rumour floated up from planet Earth. Cybermen and the Ice Warriors went white with fear.

The Daleks announced an unconditional surrender. Dr. Who, they heard, may turn into a WOMAN.

The days of almost equal contests between the good doctor and the baddies of the Universe look numbered if a group of Labour Euro MPs win their argument.

In the interests of sex equality they want a Time Lady to take over the role lot vacant by Colin Baker when the of a new series begins in March.

They wrote to BBC chief Alasdair Milne yesterday saying: "Children watching Dr. Who have for years seen a man as the high tech wizard with women as mere assistants.

"So, in a subtle way, the image persists that high tech jobs are an exclusive male preserve." The MPs — London's Carole Tongue and Mike Elliot, Christine Crawley from Birmingham and Manchester's Eddy Newman—insist: "It is high time a woman played the part."