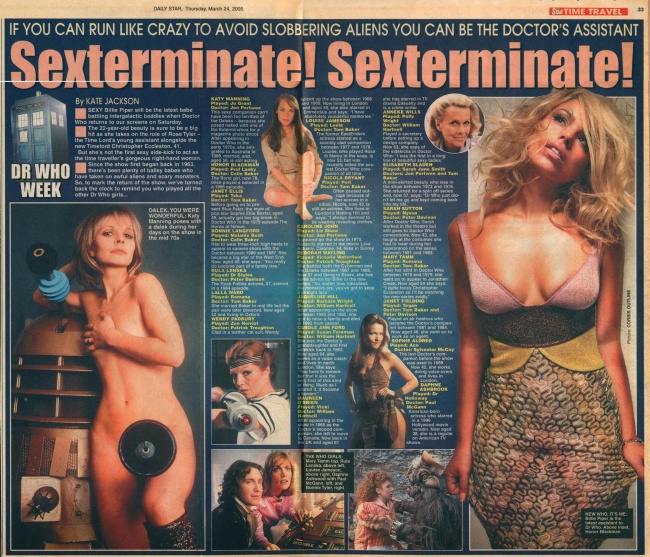 SEXY Billie Piper will be the latest babe battling intergalactic baddies when Doctor Who returns to our screens on Saturday.

The 22-year-old beauty is sure to be a big hit as she takes on the role of Rose Tyler —the Time Lord's young assistant alongside the new Timelord Christopher Eccleston, 41.

But she's not the first sexy side-kick to act as the time traveller's gorgeous right-hand woman.

Since the show first began back in 1963. there's been plenty of ballsy babes who have taken on awful aliens and scary monsters. So, to mark the return of the show, we've turned back the clock to remind you who played all the other Dr Who girls...

This sexy companion can't have been too terrified of the Daleks - because she posed naked with one of the Exterminators for a magazine photo shoot. After appearing in Doctor Who in the early 1970s. she emigrated to Australia in 1989, married, and, aged 56, is still acting.

Before going on to present Blue Peter, the mum of pop star Sophie Ellis Bexter, aged 49, actually got her big break in Doctor Who in the 1979 episode The Horns of Nimon.

Had to wear three-inch high heels to appear in camera shots with the Doctor between 1986 and 1987. She became a big star of the West End. Now, aged 40. she says: "You really do become part of a family tree."

She married Baker in real life but the pair were later divorced. Now aged 52 and living in Oxford.

Clad in a leather cat suit, Wendy spiced up the show between 1968 and 1969. Now living in London and aged 56. she also starred in Emmerdale and says: "I have absolutely wonderful memories."

Doctor: Tom Baker The former EastEnders actress starred as a scantily clad companion between 1977 and 1978. Louise, who played Rosa di Marco in the soap, is now 53. but was recently voted the sexiest Doctor Who companion of all time.

Often caused outrage because of her scenes in a bikini. Nicola, now 43, is still an actress. She lives in London's Notting Hill and says: "I always seemed to be wearing revealing clothes."

Appeared on the show in 1970. Recently starred in the movie Love Actually. Carolin, 54. lives in Surrey

She battled both the Cybermen and Daleks between 1967 and 1968. Now 57 and living in Essex, she has some advice for Billie in the new series: "No matter how ridiculous monsters are, you've got to keep straight face."

She was the Doctor's granddaughter and first sidekick back in 1963. Now aged 64, she works as a voice coach and lives in north London. She says: "You have to remember that it was the very first of this kind thing. Much as I adored it, it became a burden."

After appearing in the show in 1965 as the Doctor's second companion, she left to move Canada. Now back in the UK and aged 61 she has starred in TV drama Casualty and is a crime writer.

Played a secretary before setting up a design company. Now 63, she says of the sidekicks in Doctor Who: "I was the first in a long line of beautiful sexy ladies."

A mini-skirted beauty who was in the show between 1973 and 1976. She returned for a spin off series and, now 57. says: "Dr Who just didn't let me go and kept coming back into my life."

After Doctor Who, Sarah worked in the theatre but still goes to Doctor Who conventions. Now 43, she laughs at the costumes she had to wear during her appearance on the series between 1981 and 1983.

After her stint in Doctor Who between 1978 and 1979. She went on to appear in Jonathan Creek. Now aged 54 she says: "I quite fancy Christopher Eccleston so I'll be watching the new series avidly."

Played an air hostess who became the Doctor's companion between 1981 and 1984. Now aged 48. she went on to work as an agent.

The last Doctor's companion before the show was axed in 1989. Now 42, she works doing voice-overs and lives in London.

American-born actress who starred in a 1996 Hollywood movie version. Now aged 38, she is a regular on American TV shows.

Caption: DALEK, YOU WERE WONDERFUL: Katy Manning poses with a dalek during her days on the show in the mid 70s

Caption: NEW WHO. IT'S ME: A Billie Piper is the latest assistant to Dr Who. Above inset. Honor Blackman