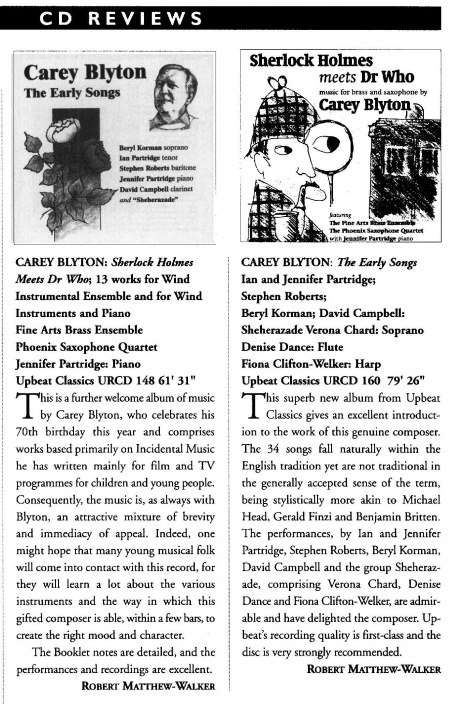 This is a further welcome album of music by Carey Blyton, who celebrates his 70th birthday this year and comprises works based primarily on Incidental Music he has written mainly for film and TV programmes for children and young people. Consequently, the music is, as always with Blyton, an attractive mixture of brevity and immediacy of appeal. Indeed, one might hope that many young musical folk will come into contact with this record, for they will learn a lot about the various instruments and the way in which this gifted composer is able, within a few bars, to create the right mood and character.

The Booklet notes are detailed, and the performances and recordings are excellent.

This superb new album from Upbeat Classics gives an excellent introduction to the work of this genuine composer. The 34 songs fall naturally within the English tradition yet are not traditional in the generally accepted sense of the term, being stylistically more akin to Michael Head, Gerald Finzi and Benjamin Britten. The performances, by Ian and Jennifer Partridge, Stephen Roberts, Beryl Korman, David Campbell and the group Sheherazade, comprising Verona Chard, Denise Dance and Fiona Clifton-Welker, are admirable and have delighted the composer. Upbeat's recording quality is first-class and the disc is very strongly recommended.