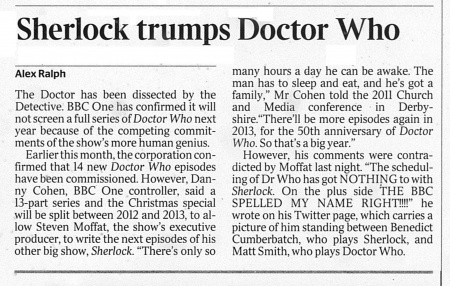 The Doctor has been dissected by the Detective. BBC One has confirmed it will not screen a full series of Doctor Who next year because of the competing commitments of the show's more human genius.

Earlier this month, the corporation confirmed that 14 new Doctor Who episodes have been commissioned. However, Danny Cohen, BBC One controller, said a 13-part series and the Christmas special will be split between 2012 and 2013, to allow Steven Moffat, the show's executive producer, to write the next episodes of his other big show, Sherlock. "There's only so many hours a day he can be awake. The man has to sleep and eat, and he's got a family," Mr Cohen told the 2011 Church and Media conference in Derbyshire. "There'll be more episodes again in 2013, for the 50th anniversary of Doctor Who. So that's a big year."

However, his comments were contradicted by Moffat last night. "The scheduling of Dr Who has got NOTHING to with Sherlock. On the plus side THE BBC SPELLED MY NAME RIGHT!!!!" he wrote on his Twitter page, which carries a picture of him standing between Benedict Cumberbatch, who plays Sherlock, and Matt Smith, who plays Doctor Who.