Should Dr Who be reincarnated as a Time Lady? 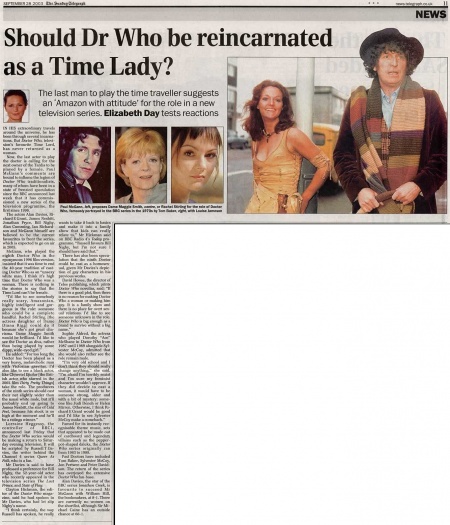 The last man to play the timelord suggests an 'Amazon with attitude' for the role in a new TV series. Elizabeth Day tests reactions.

In his extraordinary travels around the universe, he has been through several incarnations. But Doctor Who, television's favourite Time Lord, has never returned as a woman.

Now, the last actor to play the doctor is calling for the next owner of the Tardis to be played by a female. Paul McGann's comments are bound to inflame the legion of Doctor Who traditionalists, many of whom have been in a state of frenzied speculation since the BBC announced last week that it has commissioned a new series of the television programme, the first since 1996.

McGann, who played the eighth Doctor Who in the eponymous 1996 film version, insisted that it was time to end the 40-year tradition of casting Doctor Who as an "unsexy white man. I think it's high time that Doctor Who was a woman. There is nothing in the stories to say that the Time Lord can't be female.

"I'd like to see somebody really scary, Amazonian, highly intelligent and gorgeous in the role: someone who could be a complete handful. Rachel Stirling [the actress daughter of Dame Diana Rigg] could do it because she's got great charisma. Dame Maggie Smith would be brilliant. I'd like to see the Doctor as diva, rather than being played by some dippy, wide-eyed girl."

He added: "For too long the Doctor has been played as a very heavy, melancholic man with Victorian gravitas. I'd also like to see a black actor, like Chjwetel Ejiofor [the British actor who starred in the 2002 film Dirty Pretty Things] take the role. The producers of the ninth series should cast their net slightly wider than the usual white male, but it'll probably end up going to James Nesbitt, the star of Cold Feet, because his stock is so high at the moment and he'll be a ratings winner."

Lorraine Heggessy, the controller of BBC1, announced last Friday that the Doctor Who series would be making a return to Saturday evening television. It will be scripted by Russell T Davies, the writer behind the Channel 4 series Queer As Folk, who is a fan.

Mr Davies is said to have professed a preference for Bill Nighy, the 52-year-old actor who recently appeared in the television series The Lost Prince, and State of Play.

Clayton Hickman, the editor of the Doctor Who magazine, said he had spoken to Mr Davies, who had let slip Nighy's name.

"I think certainly, the way Russell has spoken, he really wants to take it back to basics and make it into a family show that kids can really relate to," Mr Hickman said on BBC Radio 4's Today programme. "Russell favours Bill Nighy, but I'm not sure I should have said that."

There has also been speculation that the ninth Doctor could be cast as a homosexual, given Mr Davies's depiction of gay characters in his previous works.

David Howse, the director of Telos publishing, which prints Doctor Who novellas, said: "If there is a good plot, then there is no reason for making Doctor Who a woman or making him gay. It is a family show and there is no place for overt sexual relations. I'd like to see someone unknown in the role. Doctor Who is big enough as a brand to survive without a big name."

Sophie Aldred, the actress who played Dorothy "Ace" McShane in Doctor Who from 1987 until 1989 alongside Sylvester McCoy, admitted that she would also rather see the role remain male.

"I'm very old school and I don't think they should really change anything," she said. "I'm afraid I'm terribly sexist and I'm sure my feminist character wouldn't approve. If they did decide to cast a woman, it would have to be someone strong, older and with a bit of mystery: someone like Judi Dench or Helen Mirren. Otherwise, I think Richard E Grant would be good and I'd like to see Sylvester McCoy make a comeback."

Famed for its instantly recognisable theme music, sets that appeared to be made out of cardboard and legendary villains such as the pepperpot-shaped daleks, the Doctor Who series originally ran from 1963 to 1989.

Past Doctors have included Tom Baker, Sylvester McCoy, Jon Pertwee and Peter Davidson. The return of the series has overjoyed the extensive Doctor Who fan-base.

Alan Davies, the star of the BBC series Jonathan Creek, is favourite to succeed Mr McGann with William Hill, the bookmakers, at 8-1. There are currently no women on the shortlist, although Sir Michael Caine has an outside chance at 66-1.

Caption: Paul McGann, left, proposes Dame Maggie Smith, centre, or Rachel Stirling for the role of Doctor Who, famously portrated in the BBC series in the 1970s by Tom Baker, right, with Louise Jameson