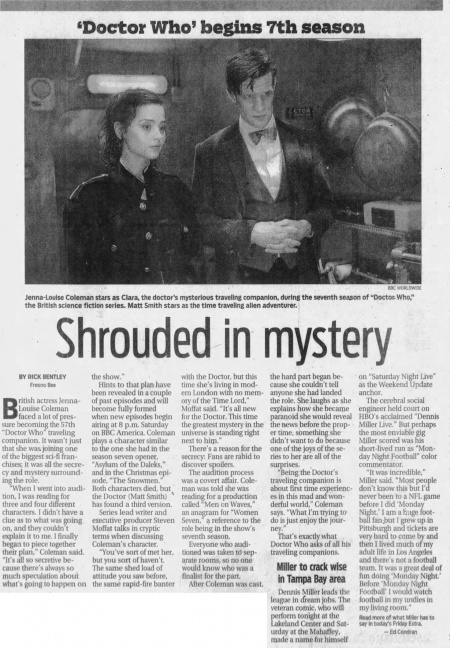 British actress Jenna-Louise Coleman faced a lot ofpres-sure becoming the 57th "Doctor Who" traveling companion. It wasn't just that she was joining one of the biggest sci-fi franchises; it was all the secrecy and mystery surrounding the role.

"When I went into audition, I was reading for three and four different characters. I didn't have a clue as to what was going on, and they couldn't explain it to me. I finally began to piece together their plan," Coleman said. "It's all so secretive because there's always so much speculation about what's going to happen on the show."

Hints to that plan have been revealed in a couple of past episodes and will become fully formed when new episodes begin airing at 8 p.m. Saturday on BBC America. Coleman plays a character similar to the one she had in the season seven opener, "Asylum of the Daleks," and in the Christmas episode, "The Snowmen." Both characters died, but the Doctor (Matt Smith) has found a third version.

"You've sort of met her, but you sort of haven't. The same shed load of attitude you saw before, the same rapid-fire banter with the Doctor, but this time she's living in modem London with no memory of the Time Lord," Moffat said. "It's all new for the Doctor. This time the greatest mystery in the universe is standing right next to him."

There's a reason for the secrecy: Fans are rabid to discover spoilers.

The audition process was a covert affair. Coleman was told she was reading for a production called "Men on Waves," an anagram for "Women Seven," a reference to the role being in the show's seventh season.

Everyone who auditioned was taken td separate rooms, so no one would know who was a finalist for the part.

After Coleman was cast, the hard part began because she couldn't tell anyone she had landed the role. She laughs as she explains how she became paranoid she would reveal the news before the proper time, something she didn't want to do because one of the joys of the series to her are all of the surprises.

"Being the Doctor's traveling companion is about first time experiences in this mad and wonderful world," Coleman says. "What I'm trying to do is just enjoy the journey."

That's exactly what Doctor Who asks of all his traveling companions.