Sinister situations for the Doctor 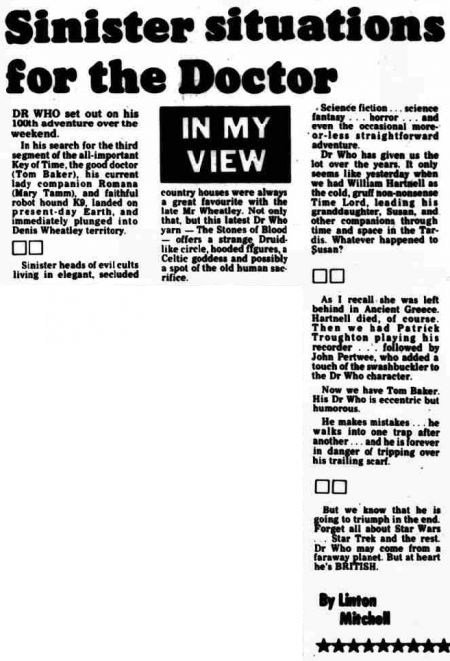 DR WHO set out on his 100th adventure over the weekend. In his search for the third segment of the all-important Key of Time, the good doctor (Tom Baker), his current lady companion Romana (Mary Tamm), and faithful robot hound K9, landed on present-day Earth, and immediately plunged into Denis Wheatley territory.

Sinister heads of evil cults living in elegant, secluded country houses were always a great favourite with the late Mr Wheatley. Not only that, but this latest Dr Who yarn - The Stones of Blood offers a strange Druidlike circle, hooded figures, a Celtic goddess and possibly a spot of the old human sacrifice.

Dr Who has given us the lot over the years. It only seems like yesterday when we had William Hartsell as the cold, gruff non-nonsense Time Lord, leading his granddaughter, Susan, and other companions through time and space in the Tardis. Whatever happened to Susan?

As I recall she was left behind in Ancient Greece. Hartnell died, of course. Then we had Patrick Troughton playing his recorder ... followed by John Pertwee, who added a touch of the swashbuckler to the Dr Who character.

Now we have Tom Baker. His Dr Who is eccentric but humorous.

He makes mistakes ... he walks into one trap after another ... and he is forever in danger of tripping over his trailing scarf.

But we know that he is going to triumph in the end. Forget all about Star Wars, Star Trek and the rest. Dr Who may come from a faraway planet. But at heart he's BRITISH.