Six of the best Moffat moments 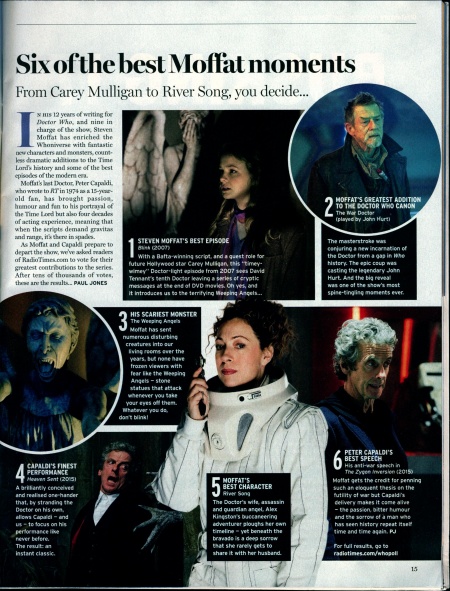 From Carey Mulligan to River Song, you decide...

IN HIS 12 years of writing for Doctor Who, and nine in charge of the show, Steven Moffat has enriched the Whoniverse with fantastic new characters and monsters, countless dramatic additions to the Time Lord's history and some of the best episodes of the modern era.

Moffat's last Doctor, Peter Capaldi, who wrote to RT in 1974 as a 15-year-old fan, has brought passion, humour and fun to his portrayal of the Time Lord but also four decades of acting experience, meaning that when the scripts demand gravitas and range, it's there in spades.

As Moffat and Capaldi prepare to depart the show, we've asked readers of RadioTimes.com to vote for their greatest contributions to the series. After tens of thousands of votes, these are the results...

With a Bafta-winning script, and a guest role for future Hollywood star Carey Mulligan, this "timey-wimey" Doctor-light episode from 2007 sees David Tennant's tenth Doctor leaving a series of cryptic messages at the end of DVD movies. Oh yes, and it introduces us to the terrifying Weeping Angels...

The masterstroke was conjuring a new incarnation of the Doctor from a gap in Who history. The epic coup was casting the legendary John Hurt. And the big reveal was one of the show's most spine-tingling moments ever.

3 HIS SCARIEST MONSTER The Weeping Angels

Moffat has sent numerous disturbing creatures into our living rooms over the years, but none have frozen viewers with fear like the Weeping Angels — stone statues that attack whenever you take your eyes off them. Whatever you do, don't blink!

A brilliantly conceived and realised one-hander that, by stranding the Doctor on his own, allows Capaldi — and us — to focus on his performance like never before. The result: an instant classic.

The Doctor's wife, assassin and guardian angel, Alex Kingston's buccaneering adventurer ploughs her own timeline — yet beneath the bravado is a deep sorrow that she rarely gets to share it with her husband.

Moffat gets the credit for penning such an eloquent thesis on the futility of war but Capaldi's delivery makes it come alive — the passion, bitter humour and the sorrow of a man who has seen history repeat itself time and time again.

For full results, go to radiotimese.com/whopoll