So Who's a pretty boy then, Doctor? 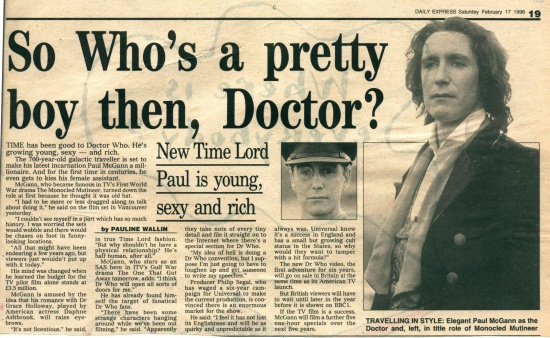 TIME has been good to Doctor Who. He's growing young, sexy — and rich.

The 700-year-old galactic traveller is set to make his latest incarnation Paul McGann a millionaire. And for the first time in centuries, he even gets to kiss his female assistant.

McGann, who became famous in TV's First World War drama The Monocled Mutineer, turned down the role at first because he thought it was old hat.

"I had to be more or less dragged along to talk about doing it," he said on the film set in Vancouver yesterday.

"I couldn't see myself in a part which has so much history. I was worried the sets would wobble and there would be chases on foot in funny-looking locations.

"All that might have been endearing a few years ago, but viewers just wouldn't put up with, it today."

His mind was changed when he learned the budget for the TV pilot film alone stands at £3.5 million.

McGann is amused by the idea that his romance with Dr Grace Holloway, played by American actress Daphne Ashbrook, will raise eyebrows.

"It's not licentious," he said, in true Time Lord fashion. "But why shouldn't he have a physical relationship? He's half human, after all."

McGann, who stars as an SAS hero in ITV's Gulf War drama The One That Got Away tomorrow, adds: "I think Dr Who will open all sorts of doors for me."

He has already found himself the target of fanatical Dr Who fans.

"There have been some strange characters hanging around while we've been out filming," he said. "Apparently they take note of every tiny detail and file it straight on to the Internet where there's a special section for Dr Who.

"My idea of hell is doing a Dr Who convention, but I suppose I'm just going to have to toughen up and get someone to write my speeches."

Producer Philip Segal, who has waged a six-year campaign for Universal to make the current production, is convinced there is an enormous market for the show.

He said: "I feel it has not lost its Englishness and will be as quirky and unpredictable as it always was. Universal know it's a success in England and has a small but growing cult status in the States, so why would they want to tamper with a hit formula?"

The new Dr Who video, the first adventure for six years, will go on sale in Britain at the same time as its American TV launch.

But British viewers will have to wait until later in the year before it is shown on BBC 1.

If the TV film is a success, McGann will film a further five one-hour specials over the next five years.

Caption: TRAVELLING IN STYLE: Elegant Paul McGann as the Doctor and, left, in title role of Monocled Mutineer