Something is Cooking for The Doctor 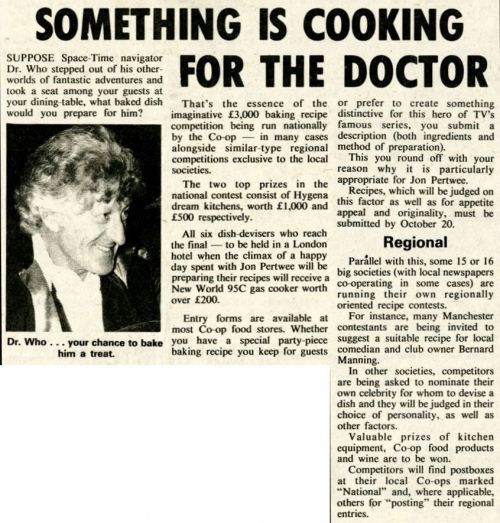 SUPPOSE Space-Time navigator Dr. Who stepped out of his other-worlds of fantastic adventures and took a scat among your guests at your dining-table, what baked dish would you prepare for him?

That's the essence of the imaginative £3,000 baking recipe competition being run nationally by the Co-op — in many cases alongside similar-type regional competitions exclusive to the local societies.

The two top prizes in the national contest consist of Hygena dream kitchens, worth £1,000 and £500 respectively.

All six dish-devisers who reach the final - to be held in a London hotel when the climax of a happy day spent with Jon Pertwee will be preparing their recipes will receive a New World 95C gas cooker worth over £200.

Entry forms are available at most Co-op food stores. Whether you have a special party piece baking recipe you keep for guests or prefer to create something distinctive for this hero of TV's famous series, you submit a description (both ingredients and method of preparation).

This you round off with your reason why it is particularly appropriate for Jon Pertwee.

Recipes, which will be judged on this factor as well as for appetite appeal and originality, must be submitted by October 20.

Parallel with this, some 15 or 16 big societies (with local newspapers co-operating in some casts) arc running their own regionally oriented recipe contests.

For instance, many Manchester contestants are being invited to suggest a suitable recipe for local comedian and club owner Bernard Manning.

In other societies, competitors are being asked to nominate their own celebrity for whom to devise a dish and they will be judged in their choice of personality, as well as other factors.

Competitors will find postboxes at their local Co-ops marked "National" and, where applicable, others for "posting" their regional entries.