Sophie, you're an Ace 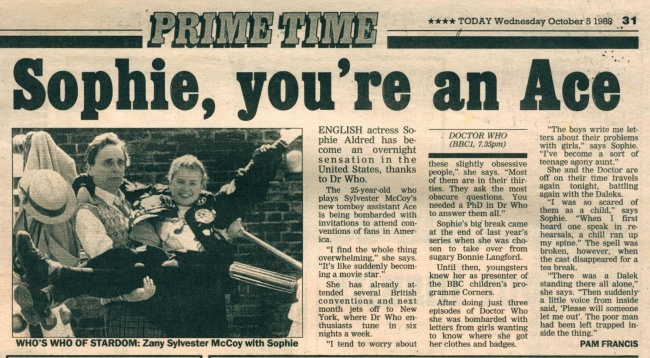 ENGLISH actress Sophie Aldred has become an overnight sensation in the United States, thanks to Dr Who.

The 25-year-old who plays Sylvester McCoy's new tomboy assistant Ace is being bombarded with invitations to attend conventions of fans in America.

"I find the whole thing overwhelming," she says. "It's like suddenly becoming a movie star."

She has already attended several British conventions and next month jets off to New York, where Dr Who enthusiasts tune in six nights a week.

"I tend to worry about these slightly obsessive people," she says. "Most of them are in their thirties. They ask the most obscure questions. You needed a PhD in Dr Who to answer them all."

Sophie's big break came at the end of last year's series when she was chosen to take over from sugary Bonnie Langford.

Until then, youngsters knew her as presenter of the BBC children's programme Corners.

After doing just three episodes of Doctor Who she was bombarded with letters from girls wanting to know where she got her clothes and badges.

"The boys write me letters about their problems with girls," says Sophie. "I've become a sort of teenage agony aunt."

She and the Doctor are off on their time travels again tonight, battling again with the Daleks.

"I was so scared of them as a child," says Sophie. "When I first heard one speak in rehearsals, a chill ran up my spine." The spell was broken, however, when the cast disappeared for a tea break.

"There was a Dalek standing there all alone," she says. "Then suddenly a little voice from inside said, 'Please will someone let me out'. The poor man had been left trapped inside the thing."

Caption: WHO'S WHO OF STARDOM: Zany Sylvester McCoy with Sophie