Sorry Doc, you're not the real McCoy 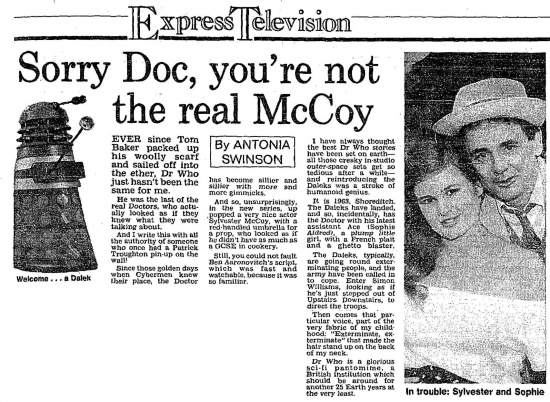 EVER since Tom Baker packed up his woolly scarf and sailed off into the ether, Dr Who just hasn't been the same for me.

He was the last of the real Doctors, who actually looked as if they knew what they were talking about.

And I write this with all the authority of someone who once had a Patrick Troughton pin-up on the wall!

Since those golden days when Cybermen knew their place, the Doctor has become sillier and sillier with more and more gimmicks.

And so, unsurprisingly, in the new series, up popped a very nice actor Sylvester McCoy, with a red-handled umbrella for a prop, who looked as if he didn't have as much as a GCSE in cookery.

Still, you could not fault Ben Aaronovitch's script, which was fast and watchable, because it was so familiar.

I have always thought the best Dr Who stories have been set on earth—all those creaky in-studio outer-space sets get so tedious after a while—and reintroducing the Daleks was a stroke of humanoid genius.

It is 1963, Shoreditch. The Daleks have landed, and so, incidentally, has the Doctor with his latest assistant Ace (Sophie Aldred), a plump little girl with a French plait and a ghetto blaster,

The Daleks, typically, are going round exterminating people, and the army have been called in to cope. Enter Simon Williams, looking as if he's just stepped out of Upstairs Downstairs, to direct the troops.

Then comes that particular voice, part of the very fabric of my childhood: "Exterminate, exterminate" that made the hair stand up on the back of my neck.

Dr Who is a glorious sci-fi pantomime, a British institution which should be around for another 25 Earth years at the very least.

Caption: In trouble: Sylvester and Sophie