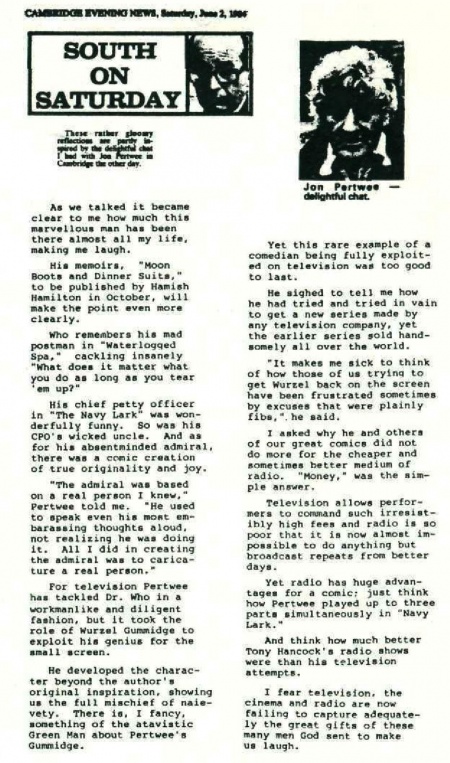 These rather gloomy reflections are partly inspired by the delightful chat I had with Jon Pertwee in Cambridge the other day.

As we talked it became clear to me how much this marvellous man hoe been there almost all my life. making me laugh.

His memoirs, "Moon Boots and Dinner Suits," to be published by Hamish Hamilton in October, will make the point even more clearly.

Who remembers his mad postman in "Waterlogged Spa,' cackling insanely "What does it matter what you do as long as you tear 'em up?"

His chief petty officer in "The Navy Lark" was wonderfully funny. So was his CPO's wicked uncle. And as for his absentminded admiral, there was a comic creation of true originality end joy.

"The admiral was based on a real person I knew,' Pertwee told me. "He used to speak even his most embarassing thoughts aloud, not realising he was doing it. All I did In creating the admiral wee to caricature a real person.'

For television Pertwee ha. tackled Dr. Who in a workmanlike and diligent fashion, but it took the role of Wurzel Gummidge to exploit his genius for the small screen.

He developed the character beyond the author's original inspiration, showing us the full mischief of naievety. There is, I fancy, something of the atavistic Green Man about Pertwee's Gummidge.

Yet this rare example of a comedian being fully exploited on television was too good to last.

He sighed to tell me how he had tried and tried in vain to get a new series made by any television company, yet the earlier series sold handsomely ell over the world.

"It makes we sick to think of how those of us trying to get Wurzel back on the screen have been frustrated sometimes by excuses that were plainly fine," he said.

I asked why he and other. of our great comic. did not do more for the cheaper and sometimes better medium of radio. "Money,' was the simple answer.

Television allows performers to command such irresistibly high fees and radio is so poor that it Is now almost impossible to do anything but broadcast repeats from better days.

Yet radio has huge advantages for a comic, just think how Pertwee played up to three parts simultaneously in "Navy Lark."

And think how much better Tony Hancock's radio shows were than his television attempts.

I fear television, the cinema and radio are now falling to capture adequately the great gifts of these many men God sent to make us laugh.