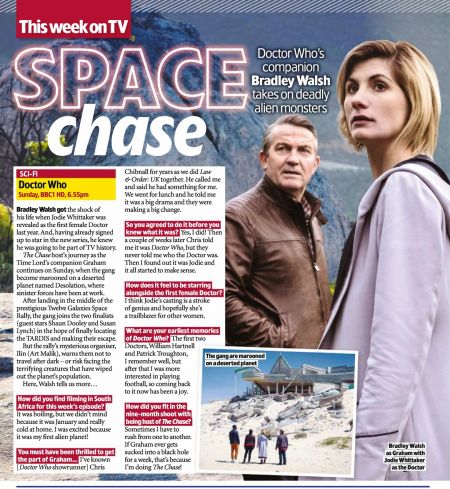 Bradley Walsh got the shock of his life when Jodie Whittaker was revealed as the first female Doctor last year. And, having already signed up to star in the new series, he knew he was going to be part of TV history.

The Chase host's journey as the Time Lord's companion Graham continues on Sunday, when the gang become marooned on a deserted planet named Desolation, where sinister forces have been at work.

After landing in the middle of the prestigious Twelve Galaxies Space Rally, the gang joins the two finalists (guest stars Shaun Dooley and Susan Lynch) in the hope of finally locating the TARDIS and making their escape.

But the rally's mysterious organiser, Ilin (Art Malik), warns them not to travel after dark – or risk facing the terrifying creatures that have wiped out the planet's population.

How did you find filming in South Africa for this week's episode?

You must have been thrilled to get the part of Graham I've known [Doctor Who showrunner] Chris Chibnall for years as we did Law & Order: UK together. He called me and said he had something for me. We went for lunch and he told me it was a big drama and they were making a big change.

So you agreed to do it before you knew what it was?

Yes, I did! Then a couple of weeks later Chris told me it was Doctor Who, but they never told me who the Doctor was. Then I found out it was Jodie and it all started to make sense.

How does it feel to be starring alongside the first female Doctor?

I think Jodie's casting is a stroke of genius and hopefully she's a trailblazer for other women.

The first two Doctors, William Hartnell and Patrick Troughton, I remember well, but after that I was more interested in playing football, so coming back to it now has been a joy.

How did you fit in the nine-month shoot with being host of The Chase?

Sometimes I have to rush from one to another. If Graham ever gets sucked into a black hole for a week, that's because I'm doing The Chase!

Caption: Bradley Walsh as Graham with Jodie Whittaker as the Doctor

Caption: The gang are marooned on a deserted planet