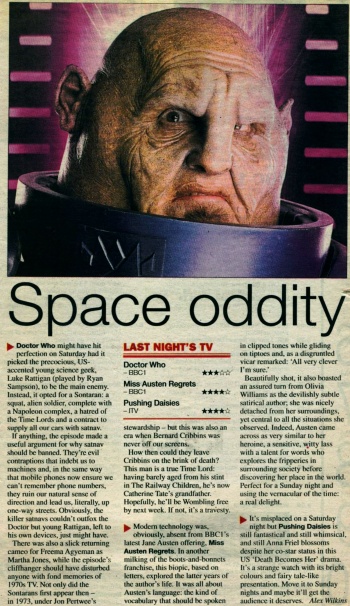 Doctor Who might have hit perfection on Saturday had it picked the precocious, US-accented young science geek, Luke Rattigan (played by Ryan Sampson), to be the main enemy. Instead, it opted for a Sontaran: a squat, alien soldier, complete with a Napoleon complex, a hatred of the Time Lords and a contract to supply all our cars with satnav.

If anything, the episode made a useful argument for why satnav should be banned. They're evil contraptions that indebt us to machines and, in the same way that mobile phones now ensure we can't remember phone numbers, they ruin our natural sense of direction and lead us, literally, up one-way streets. Obviously, the killer satnavs couldn't outfox the Doctor but young Rattigan, left to his own devices, just might have.

There was also a slick returning cameo for Freema Agyeman as Martha Jones, while the episode's cliffhanger should have disturbed anyone with fond memories of 1970s TV. Not only did the Sontarans first appear then—in 1973, under Jon Pertwee's stewardship — but this was also an era when Bernard Cribbins was never off our screens.

How then could they leave Cribbins on the brink of death? This man is a true Time Lord: having barely aged from his stint in The Railway Children, he's now Catherine Tate's grandfather. Hopefully, he'll be Wombling free by next week. If not, it's a travesty.