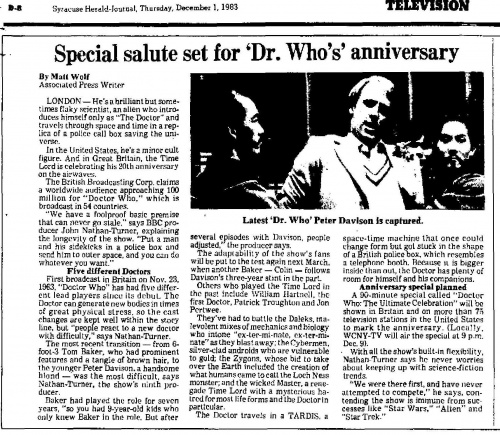 He's a brilliant but sometimes flaky scientist, an alien who introduces himself only as "The Doctor" and travels through space and time in a replica of a police call box saving the universe.

In the United States, he's a minor cult figure. And in Great Britain, the Time Lord celebrates his 20th anniversary on the airwaves this month.

The British Broadcasting Corp. claims a worldwide audience approaching 100 million for "Doctor Who," which is broadcast in 54 countries.

"We have a foolproof basic premise that can never go stale," says BBC producer John Nathan-Turner, explaining the longevity of the show. "Put a man and his sidekicks in a police box and send him to outer space, and you can do whatever you want."

First broadcast in Britain on Nov. 23, 1963, "Doctor Who" has had five different lead players since its debut. The Doctor can generate new bodies in times of great physical stress, so the cast changes are kept well within the story line, but "people react to a new doctor with difficulty," says Nathan-Turner.

The most recent transition _ from 6-foot-3 Tom Baker, who had prominent features and a tangle of brown hair, to the younger Peter Davison, a handsome blond _ was the most difficult, says Nathan-Turner, the show's ninth producer.

Baker had played the role for seven years, "so you had 9-year-old kids who only knew Baker in the role. But after several episodes with Davison, people adjusted," the producer says.

The adaptability of the show's fans will be put to the test again next March, when another Baker _ Colin _ follows Davison's three-year stint in the part.

Others who played the Time Lord in the past include William Hartnell, the first Doctor, Patrick Troughton and Jon Pertwee.

They've had to battle the Daleks, malevolent mixes of mechanics and biology who intone "ex-ter-mi-nate, ex-ter-mi-nate" as they blast away; the Cybermen, silver-clad androids who are vulnerable to gold; the Zygons, whose bid to take over the Earth included the creation of what humans came to call the Loch Ness monster; and the wicked Master, a renegade Time Lord with a mysterious hatred for most life forms and the Doctor in particular.

The Doctor travels in a TARDIS, a space-time machine that once could change form but got stuck in the shape of a British police box, which resembles a telephone booth. Because it is bigger inside than out, the Doctor has plenty of room for himself and his companions.

A 90-minute special called "Doctor Who: The Ultimate Celebration" will be shown in Britain and on more than 75 television stations in the United States to mark the anniversary. (Locally, WCNY-TV will air the special at 9 p.m. Dec. 9)

Former sidekicks and Doctors alike are due in Chicago on Nov. 26-27 for what is expected to be the largest "Doctor Who" convention ever.

"The marketing side of 'Doctor Who' is absolutely enormous," says BBC spokesman Kevin O'Shea.

Among the "Doctor Who" items available for purchase are games, candy, T-shirts, mugs, records, and even a tent designed to resemble the TARDIS. The TARDIS, especially popular with mail-order companies in Britain, retails for $26.85.

With all the show's built-in flexibility, Nathan-Turner says he never worries about keeping up with science-fiction trends.

"We were there first, and have never attempted to compete," he says, contending the show is immune from successes like "Star Wars," "Alien," and "Star Trek."

Despite the ability of "Doctor Who" to adapt to its times and its audience, certain changes seem unlikely.

Asked whether the Doctor might ever be played by a woman, Nathan-Turner replies, "That would be a foolhardy mission."