Spotlight on Doctor Who at science fiction festival 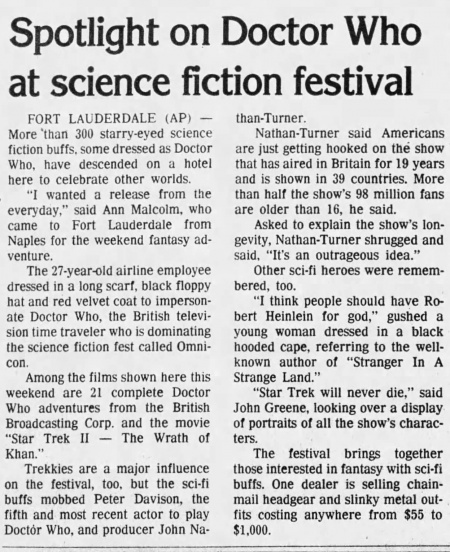 FORT LAUDERDALE (AP)—More than 300 starry-eyed science fiction buffs. some dressed as Doctor Who, have descended on a hotel here to celebrate other worlds.

"I wanted a release from the everyday," said Ann Malcolm, who came to Fort Lauderdale from Naples for the weekend fantasy adventure.

Among the films shown here this weekend are 21 complete Doctor Who adventures from the British Broadcasting Corp. and the movie "Star Trek II — The Wrath of Khan."

Trekkies are a major influence on the festival, too, but the sci-fi buffs mobbed Peter Davison, the fifth and most recent actor to play Doctor Who, and producer John Nathan-Turner.

Nathan-Turner said Americans are just getting hooked on the show that has aired in Britain for 19 years and is shown in 39 countries. More than half the show's 98 million fans are older than 16, he said.

Asked to explain the show's longevity, Nathan-Turner shrugged and said, "It's an outrageous idea."

Other sci-fi heroes were remembered, too.

"I think people should have Robert Heinlein for god," gushed a young woman dressed in a black hooded cape, referring to the well-known author of "Stranger In A Strange Land."

"Star Trek will never die," said John Greene, looking over a display of portraits of all the show's characters.

The festival brings together those interested in fantasy with sci-fi buffs. One dealer is selling chain-mail headgear and slinky metal outfits costing anywhere from $55 to $1,000.