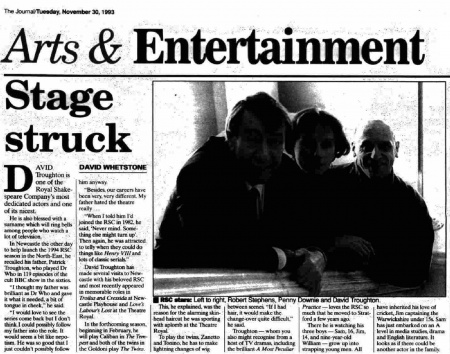 DAVID Troughton is one of the Royal Shakespeare Company's most dedicated actors and one of its nicest.

He is also blessed with a surname which will ring bells among people who watch a lot of television.

In Newcastle the other day to help launch the 1994 RSC season in the North-East, he recalled his father, Patrick Troughton, who played Dr Who in 119 episodes of the cult BBC show in the sixties.

"I thought my father was brilliant as Dr Who and gave it what it needed, a bit of tongue in cheek," he said.

"I would love to see the series come back but I don't think I could possibly follow my father into the fold. It would cam a bit like nepotism. He was so good that I just couldn't possibly follow him anyway.

"Besides, our careers have been very, very different. My father hated the theatre really ...

"When I told Id I'd joined the RSC in 1982 he said, 'Never mind. Something else might turn up'. Then again, he was attracted to telly when they could do things like Henry VIII and lots of classic serials.

David Troughton has made several visits to Newcastle with his beloved RSC and most recently appeared in memorable roles in Troilus and Cressida at Newcastle Playhouse and Lover Labour's Lost at the Theatre Royal.

In the forthcoming season, beginning in February, he will play Caliban in The Tempest and both of the twins in the Goldoni play The Twins.

This, he explained, was the reason for the alarming skinhead haircut be was sporting with aplomb at the Theatre Royal.

To play the twins, Zanetto and Tonino, he has to make lightning changes of wigs between scenes. "If I had hair, it would make the change-over quite difficult," he said.

Troughton — whom you also might recognise from a host of TV dramas including the brilliant A Most Peculiar Practice -- loves the RSC so much that he moved to Stratford a few years ago.

There he is watching his three boys — Sam, 16, Jim, 14, and nine-year-old William — grow up into strapping young men. All have inherited his love of cricket, Jim captaining the Warwickshire under 15s. Sam has just embarked on an A level in media studies, drama and English literature. It looks as if there could be another actor in the family.