Starry names in charity panto at The Lane 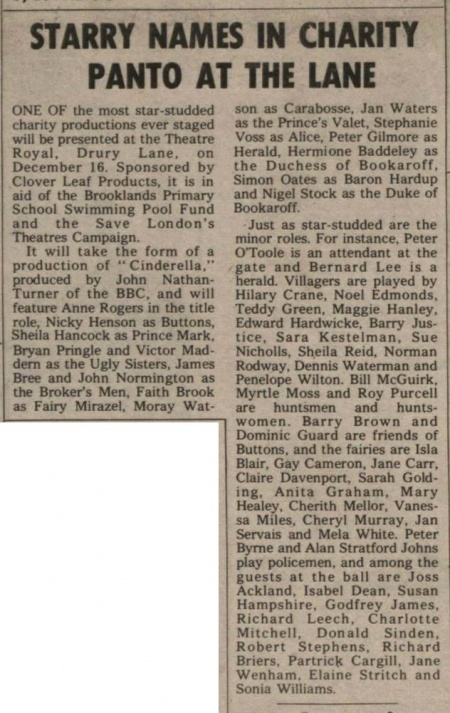 ONE OF the most star-studded charity productions ever staged will be presented at the Theatre Royal, Drury Lane, on December 16. Sponsored by Clover Leaf Products, it is in aid of the Brooklands Primary School Swimming Pool Fund and the Save London's Theatres Campaign.

It will take the form of a production of "Cinderella," produced by John Nathan-Turner of the BBC, and will feature Anne Rogers in the title role, Nicky Henson as Buttons, Sheila Hancock as Prince Mark, Bryan Pringle and Victor Madders as the Ugly Sisters, James Bree and John Normington as the Broker's Men, Faith Brook as Fairy Mirazel, Moray Watson as Carabosse, Jan Waters as the Prince's Valet, Stephanie Voss as Alice, Peter Gilmore as Herald, Hermione Baddeley as the Duchess of Bookaroff, Simon Oates as Baron Hardup and Nigel Stock as the Duke of Bookaroff.