Stars in her eyes 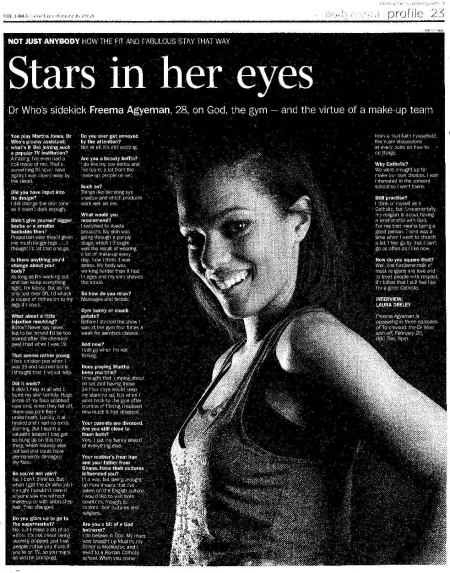 Dr Who's sidekick Freema Agyeman, 28, on God, the gym - and the virtue of a make-up team

You play Martha Jones, Dr Who's plucky assistant; what's it like joining such a popular TV institution?

Amazing. I've even had a doll made of me. That's something I'll never have again; I was blown away by the detail.

Did you have input into its design?

I did change the skin tone as it wasn't dark enough.

Didn't give yourself bigger boobs or a smaller backside then?

Proportion-wise they'd given me much longer legs...I thought I'd let that one go.

Is there anything you'd change about your body?

As long as I'm working out and can keep everything tight, I'm happy. But as I'm only just over 5ft, I'd whack a couple of inches on to my legs if I could.

What about a little injection moulding?

Botox? Never say never, but to be honest I'd be too scared after the chemical peel I had when I was 19.

That seems rather young I had chicken pox when I was 15 and scarred badly.

I thought that it would help.

It didn't help at all and it burnt my skin terribly. Huge areas of my face scabbed over and, when they fell off, there was pink flesh underneath. Luckily, it all healed and I had no extra scarring. But I learnt a valuable lesson; I had got so hung up on this tiny thing, which nobody else noticed and could have permanently damaged my face.

So you're not vain?

No, I don't think so. But when I got the Dr Who job I thought I wouldn't care if anyone saw me without make-up or with unbrushed hair. That changed.

Do you glam up to go to the supermarket?

No, but I make a bit of an effort. It's not about being secretly papped, just that people notice you more if you're on TV, so you might as well be prepared.

Do you ever get annoyed by the attention?

Not at all. It's still exciting.

Are you a beauty boffin?

I do like my cosmetics and I've learnt a lot from the make-up people on set.

Things like blending eye shadow and which products work well on me.

What would you recommend?

I switched to Aveda products. My skin was going through a pimply stage, which I thought was the result of wearing a lot of make-up every day. Now I think it was stress. My body was working harder than it had in ages and my skin showed the strain.

So how do you relax?

Before I started the show I was at the gym four times a week for aerobics classes.

I still go when I'm not filming.

Does playing Martha keep you trim?

I thought that jumping about on set and having these 14-hour days would keep my stamina up, but when I went back to the gym after months of filming I realised how much it had dropped.

Your parents are divorced. Are you still close to them both?

Very. I put my family ahead of everything else.

Your mother's from Iran and your father from Ghana. Have their cultures influenced you?

In a way, but being brought up here means that I've taken on the English culture. I would like to visit both countries, though, to explore their cultures and religions.

Are you a bit of a God botherer?

I do believe in God. My mum was brought up Muslim; my father is Methodist; and I went to a Roman Catholic school. When you come from a multifaith household, there are discussions at every point on how to do things.

We were brought up to make our own choices. I was interested in the convent school so I went there.

I think of myself as a Catholic, but fundamentally my religion is about having a relationship with God.

For me that means being a good person. There was a time when I went to church a lot; I feel guilty that I can't go as often as I like now.

How do you square that?

Well, the fundamentals of most religions are love and to treat people with respect. If I follow that I still feel like I'm a good Catholic.