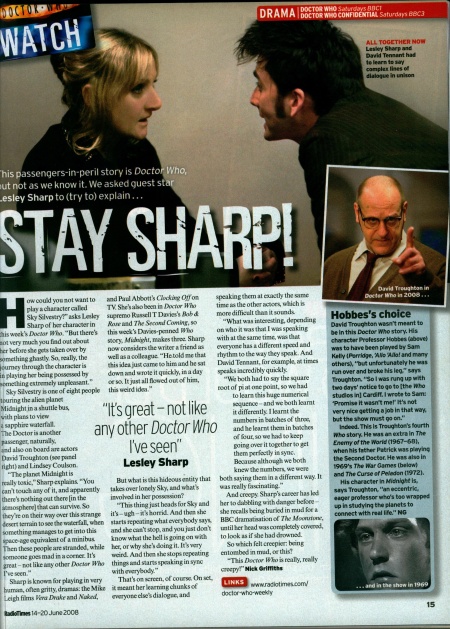 This passengers-in-peril story is Doctor Who, ut not as we know it. We asked guest star esley Sharp to (try to) explain ...

How could you not want to play a character called Sky Silvestry?" asks Lesley Sharp of her character in this week's Doctor Who. "But there's not very much you find out about her before she gets taken over by something ghastly. So, really, the journey through the character is in playing her being possessed by something extremely unpleasant." Sky Silvestry is one of eight people touring the alien planet Midnight in a shuttle bus, with plans to view a sapphire waterfall. Tthe Doctor is another passenger, naturally, and also on board are actors David Troughton (see panel right) and Lindsey Coulson. "The planet Midnight is really toxic," Sharp explains. "You can't touch any of it, and apparently here's nothing out there [in the atmosphere] that can survive. So they're on their way over this strange desert terrain to see the waterfall, when something manages to get into this pace-age equivalent of a minibus. [hen these people are stranded, while someone goes mad in a corner. It's peat - not like any other Doctor Who I've seen."

Sharp is known for playing in very human, often gritty, dramas: the Mike Leigh films Vera Drake and Naked, and Paul Abbott's Clocking Off on TV She's also been in Doctor Who supremo Russell T Davies's Bob & Rose and The Second Coming, so this week's Davies-penned Who story, Midnight, makes three. Sharp now considers the writer a friend as well as a colleague. "He told me that this idea just came to him and he sat down and wrote it quickly, in a day or so. It just all flowed out of him, this weird idea."

But what is this hideous entity that takes over lonely Sky, and what's involved in her possession?

"This thing just heads for Sky and it's - ugh - it's horrid. And then she starts repeating what everybody says, and she can't stop, and you just don't know what the hell is going on with her, or why she's doing it. It's very weird. And then she stops repeating things and starts speaking in sync with everybody."

That's on screen, of course. On set, it meant her learning chunks of everyone else's dialogue, and speaking them at exactly the same time as the other actors, which is more difficult than it sounds.

"What was interesting, depending on who it was that I was speaking with at the same time, was that everyone has a different speed and rhythm to the way they speak. And David Tennant, for example, at times speaks incredibly quickly.

"We both had to say the square root of pi at one point, so we had to learn this huge numerical sequence - and we both learnt it differently. I learnt the numbers in batches of three, and he learnt them in batches of four, so we had to keep going over it together to get them perfectly in sync. Because although we both knew the numbers, we were both saying them in a different way. It was really fascinating."

And creepy. Sharp's career has led her to dabbling with danger before - she recalls being buried in mud for a BBC dramatisation of The Moonstone, until her head was completely covered, to look as if she had drowned.

So which felt creepier: being entombed in mud, or this?

"This Doctor Who is really, really creepy!"

David Troughton wasn't meant to be in this Doctor Who story. His character Professor Hobbes (above) was to have been played by Sam Kelly (Porridge, Allo Allo! and many others), "but unfortunately he was run over and broke his leg," says Troughton. "So I was rung up with two days' notice to go to [the Who studios in] Cardiff. I wrote to Sam: 'Promise it wasn't me!' It's not very nice getting a job in that way, but the show must go on."

Indeed. This is Troughton's fourth Who story. He was an extra in The Enemy of the World (1967-68), when his father Patrick was playing the Second Doctor. He was also in 1969's The War Games (below) and The Curse of Peladon (1972).

His character in Midnight is, says Troughton, "an eccentric, eager professor who's too wrapped up in studying the planets to connect with real life." NG