Stuff We Love: Doctor Who 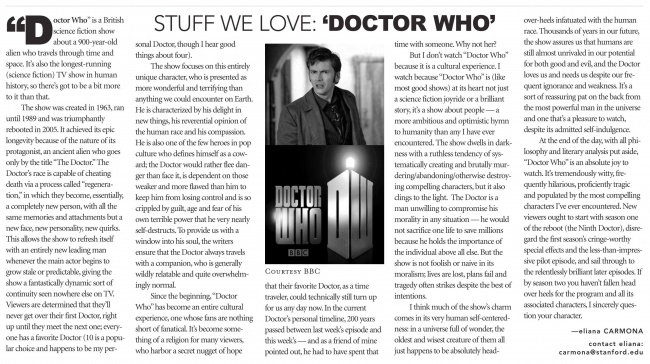 Doctor Who is a British science fiction show about a 900-year-old alien who travels through time and space. Its also the longest-running (science fiction) TV show in human history, so theres got to be a bit more to it than that.

The show was created in 1963, ran until 1989 and was triumphantly rebooted in 2005. It achieved its epic longevity because of the nature of its protagonist, an ancient alien who goes only by the title The Doctor. The Doctors race is capable of cheating death via a process called regeneration, in which they become, essentially, a completely new person, with all the same memories and attachments but a new face, new personality, new quirks. This allows the show to refresh itself with an entirely new leading man whenever the main actor begins to grow stale or predictable, giving the show a fantastically dynamic sort of continuity seen nowhere else on TV. Viewers are determined that theyll never get over their first Doctor, right up until they meet the next one; everyone has a favorite Doctor (10 is a popular choice and happens to be my personal Doctor, though I hear good things about four).

The show focuses on this entirely unique character, who is presented as more wonderful and terrifying than anything we could encounter on Earth. He is characterized by his delight in new things, his reverential opinion of the human race and his compassion. He is also one of the few heroes in pop culture who defines himself as a coward; the Doctor would rather flee danger than face it, is dependent on those weaker and more flawed than him to keep him from losing control and is so crippled by guilt, age and fear of his own terrible power that he very nearly self-destructs. To provide us with a window into his soul, the writers ensure that the Doctor always travels with a companion, who is generally wildly relatable and quite overwhelmingly normal.

Since the beginning, Doctor Who has become an entire cultural experience, one whose fans are nothing short of fanatical. Its become something of a religion for many viewers, who harbor a secret nugget of hope that their favorite Doctor, as a time traveler, could technically still turn up for us any day now. In the current Doctors personal timeline, 200 years passed between last weeks episode and this weeks-and as a friend of mine pointed out, he had to have spent that time with someone. Why not her?

But I don't watch Doctor Who because it is a cultural experience. I watch because Doctor Who is (like most good shows) at its heart not just a science fiction joyride or a brilliant story, its a show about people-a more ambitious and optimistic hymn to humanity than any I have ever encountered. The show dwells in darkness with a ruthless tendency of systematically creating and brutally murdering/abandoning/otherwise destroying compelling characters, but it also clings to the light. The Doctor is a man unwilling to compromise his morality in any situation-he would not sacrifice one life to save millions because he holds the importance of the individual above all else. But the show is not foolish or naive in its moralism; lives are lost, plans fail and tragedy often strikes despite the best of intentions.

I think much of the shows charm comes in its very human self-centeredness: in a universe full of wonder, the oldest and wisest creature of them all just happens to be absolutely head-over-heels infatuated with the human race. Thousands of years in our future, the show assures us that humans are still almost unrivaled in our potential for both good and evil, and the Doctor loves us and needs us despite our frequent ignorance and weakness. Its a sort of reassuring pat on the back from the most powerful man in the universe and one thats a pleasure to watch, despite its admitted self-indulgence.

At the end of the day, with all philosophy and literary analysis put aside, Doctor Who is an absolute joy to watch. Its tremendously witty, frequently hilarious, proficiently tragic and populated by the most compelling characters Ive ever encountered. New viewers ought to start with season one of the reboot (the Ninth Doctor), disregard the first seasons cringe-worthy special effects and the less-than-impressive pilot episode, and sail through to the relentlessly brilliant later episodes. If by season two you havent fallen head over heels for the program and all its associated characters, I sincerely question your character.