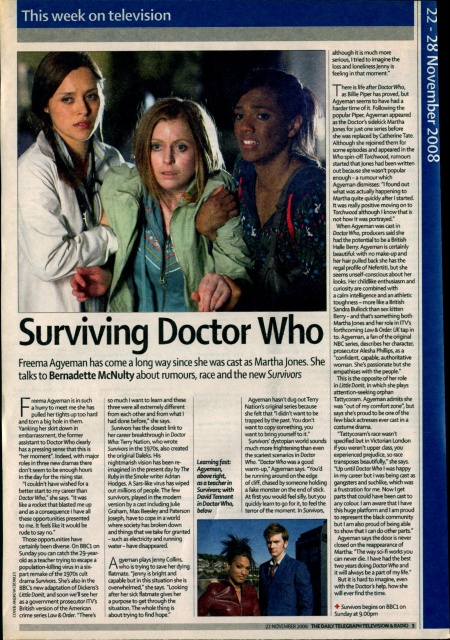 Freema Agyeman has come a long way since she was cast as Martha Jones. She talks to Bernadette McNulty about rumours, race and the new Survivors

Freema Agyeman is in such a hurry to meet me she has pulled her tights up too hard and torn a big hole in them. Yanking her skirt down in embarrassment, the former assistant to Doctor Who dearly has a pressing sense that this is "her moment". Indeed, with major roles in three new dramas there don't seem to be enough hours in the day for the rising star. "I couldn't have wished for a better start to my career than Doctor Who," she says. "It was like a rocket that blasted me up and as a consequence I have all these opportunities presented to me. It feels like it would be rude to say no."

Those opportunities have certainly been diverse. On BBC1 on Sunday you can catch the 29-year-old as a teacher trying to escape a population-killing virus in a six-part remake of the 1970s cult drama Survivors. She's also in the BBC's new adaptation of Dickens's Little Dorrit, and soon we'll see her as a government prosecutor ITV's British version of the American crime series Law & Order. "There's so much I want to learn and these three were all extremely different from each other and from what I had done before," she says. Survivors has the closest link to her career breakthrough in Doctor Who: Terry Nation, who wrote Survivors in the 1970s, also created the original Daleks. His nightmarish vision has been re-imagined in the present day by The Ruby in the Smoke writer Adrian Hodges. A Sars-like virus has wiped out millions of people. The few survivors, played in the modern version by a cast including Julie Graham, Max Beesley and Paterson Joseph, have to cope in a world where society has broken down and things that we take for granted - such as electricity and running water - have disappeared.

Agyeman plays Jenny Collins, who is trying to save her dying flatmate. "Jenny is bright and capable but in this situation she is overwhelmed," she says. "Looking after her sick flatmate gives her a purpose to get through the situation. The whole thing is about trying to find hope."

Agyeman hasn't dug out Terry Nation's original series because she felt that "I didn't want to be trapped by the past. You don't want to copy something, you want to bring yourself to it." Survivors' dystopian world sounds much more frightening than even the scariest scenarios in Doctor Who. "Doctor Who was a good warm-up," Agyeman says. "You'd be running around on the edge of cliff, chased by someone holding a fake monster on the end of stick. At first you would feel silly, but you quickly learn to go for it, to feel the terror of the moment. In Survivors, although it is much more serious, I tried to imagine the loss and loneliness Jenny is feeling in that moment."

There is life after Doctor Who, as Billie Piper has proved, but Agyeman seems to have had a harder time of it. Following the popular Piper, Agyeman appeared as the Doctor's sidekick Martha Jones for just one series before she was replaced by Catherine Tate. Although she rejoined them for some episodes and appeared in the Who spin-off Torchwood, rumours started that Jones had been written out because she wasn't popular enough - a rumour which Agyeman dismisses: "I found out what was actually happening to Martha quite quickly after I started. It was really positive moving on to Torchwood although I know that is not how it was portrayed."

When Agyeman was cast in Doctor Who, producers said she had the potential to be a British Halle Berry. Agyeman is certainly beautiful: with no make-up and her hair pulled back she has the regal profile of Nefertiti, but she seems unself-conscious about her looks. Her childlike enthusiasm and curiosity are combined with a calm intelligence and an athletic toughness - more like a British Sandra Bullock than sex kitten Berry - and that's something both Martha Jones and her role in ITV's forthcoming Law &Order UK tap in to. Agyeman, a fan of the original NBC series, describes her character, prosecutor Alesha Phillips, as a "confident, capable, authoritative woman. She's passionate but she empathises with the people." This is the opposite of her role in Little Dorrit, in which she plays attention-seeking orphan Tattycoram. Agyeman admits she was "out of my comfort zone", but says she's proud to be one of the few black actresses ever cast in a costume drama.

"Tattycoram's race wasn't specified but in Victorian London if you weren't upper class, you experienced prejudice, so race transposes beautifully," she says. "Up until Doctor Who I was happy in my career but I was being cast as gangsters and suchlike, which was a frustration for me. Now I get parts that could have been cast to any colour. I am aware that I have this huge platform and I am proud to represent the black community but I am also proud of being able to show that I can do other parts." Agyeman says the door is never closed on the reappearance of Martha: "The way sci-fi works you can never die. I have had the best two years doing Doctor Who and it will always be a part of my life." But it is hard to imagine, even with the Doctor's help, how she will ever find the time.

Survivors begins on BBC1 on Sunday at 9.00pm

Caption: Learning fast Agyeman, above right, as a teacher in Survivors; with David Tennant in Doctor Who, below