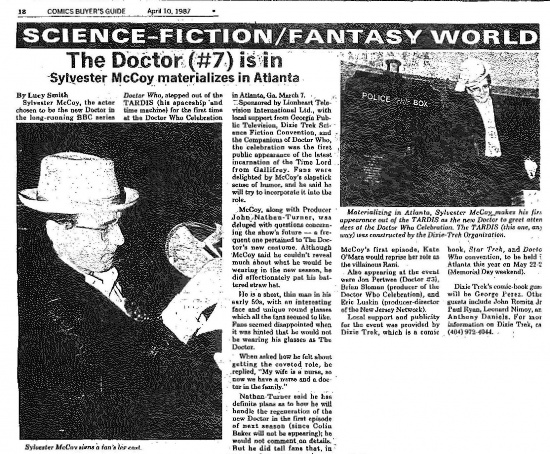 Sylvester McCoy, the actor chosen to be the new Doctor in the long-running BBC series Doctor Who, stepped out of the TARDIS (his spaceship and time machine) for the Cost time at the Doctor Who Celebration in Atlante, Ga. March 7.

Sponsored by Lionheart Television International Ltd., with local support, from Georgia Public Television, Dixie Trek Science Fiction Convention, and the Companions of Doctor Who, the celebration wee the first public appearance of the latest incarnation of the Time Lord from Gallifrey. Fans were delighted by McCoy's slapstick sense of humor, and he said he will try to incorporate it into the role.

McCoy, along with Producer John Nathan-Turner, was deluged with questions concerning the show's future — a frequent one pertained to The Doctor's new costume. Although McCoy said he couldn't reveal much about what he would he wearing in the new season, he did affectionately pat his battered straw hat.

He is a short, thin man in his early 50s, with an interesting face and unique round glasses which all the fans seemed to like. Fans seemed disappointed when it was hinted that he would not be wearing his glasses as The Doctor.

When asked how he felt about getting the coveted role, he replied, "My wife is a nurse, so now we have a nurse and a doctor in the family."

Nathan-Turner said he has definite planes as to how he will handle the regeneration of the new Doctor in the first episode of next season (since Colin Baker will not be appearing); he would not comment on details. But he did tell fans that, in McCoy's first episode, Kate O'Mara would reprise her role to the villainous Rani.

Also appearing at the event were Jon Pertwee (Doctor #3, Brien Sloman (producer of the Doctor Who Celebration), and Eric Luskin (producer-director of the New Jersey Network).

Local support and publicity for the event was provided by Dixie Trek, which is a comic book, Star Trek, and Doctor Who convention, to he held Atlanta this year an May 22-24 (Memorial Day weekend).