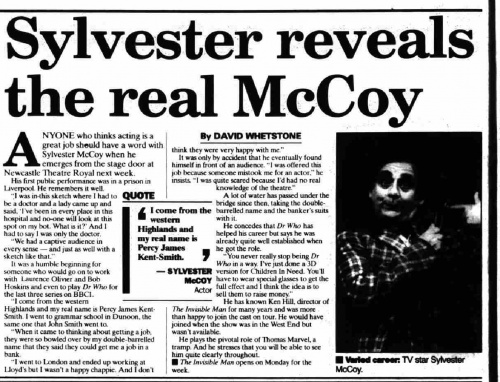 ANYONE who thinks acting is a great job should have a word with Sylvester McCoy when he emerges from the stage door at Newcastle Theatre Royal next week.

His first public performance was in a prison in Liverpool. He remembers it well.

"I was in this sketch where I had to be a doctor and a lady came up and said, 'I've been is every place in this hospital and no-one will look at this spot on my bot. What is it?' And I had to say I was only the doctor.

"We had a captive audience in every sense — and just as well with a sketch like that."

It was a humble beginning for someone who would go on to work with Laurence Olivier and Bob Hoskins and even to play Dr Who for the last three series on BBC1.

"I come from the western Highlands and my real name a Percy James Kent-Smith. I went to grammar school in Dunoon, the same one that John Smith went to.

"When it came to thinking about getting a job, they were so bowled over by my double-barrelled name that they said they could get me a job in a bank.

"I went to London and ended up working at Lloyd's but I wasn't a happy chappie. And I don't think they were very happy with me."

It was only by accident that he eventually found himself front of an audience. "I was offered this job because someone mistook me for an actor," he insists "I was quite scared because I'd had no real knowledge of the theatre."

A lot of water has passed under the bridge since their taking the double-barrelled name and the banker's suits with it.

He concedes that Dr Who has helped his career but says he was already quite well established when he got the role.

"You never really stop being Dr Who in a way. I've just done a 3D version for Children In Need, You'll have to wear special glasses to get the full effect and I think the idea is to sell them to raise money."

He has known Ken Hill, director of The Invisible Man for many years and was more than happy to join the cast on tour. He would have joined when the show was in the West End but wasn't available.

He plays the pivotal role of Thomas Marvel, a tramp. And he stresses that you will be able to see him quite dearly throughout.

The Invisible Man opens on Monday for the week.