TV Vet's The New Dr Who 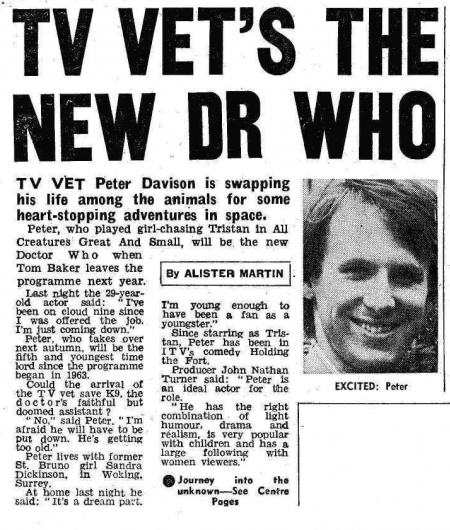 TV VET Peter Davison is swapping his life among the animals for some heart-stopping adventures in space.

Peter, who played girl-chasing Tristan in All Creatures Great And Small, will be the new Doctor Who when Tom Baker leaves the programme next year.

Last night the 29-year-old actor said: "I've been on cloud nine since I was offered the Job. I'm just coming down."

Peter who takes over next autumn, will be the fifth and youngest time lord since the programme began in 1963.

Could the arrival of the TV vet save K9, the doctor's faithful but doomed assistant ?

At home last night he said: 'It's a dream part. I'm young enough to have been a fan as a youngster."

Since starring as Tristan, Peter has been in ITV's comedy Holding the Fort.

Producer John Nathan Turner said: "Peter is an ideal actor for the role.

"He has the right combination of light humour, drama and realism, is very popular with children and has a large following with women viewers."