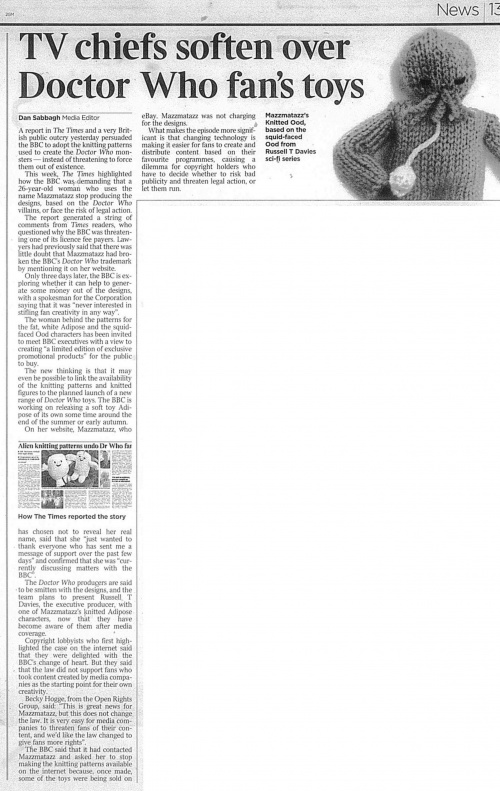 A report in The Times and a very British public outcry yesterday persuaded the BBC to adopt the knitting patterns used to create the Doctor Who monsters — instead of threatening to force them out of existence.

This week, The Times highlighted how the BBC was demanding that a 26-year-old woman who uses the name Mazzmatazz stop producing the designs, based on the Doctor Who villains, or face the risk of legal action. The report generated a string of comments from Times readers, who questioned why the BBC was threatening one of its licence fee payers. Lawyers had previously said that there was little doubt that Mazzmatazz had broken the BBC's Doctor Who trademark by mentioning it on her website.

Only three days later, the BBC is exploring whether it can help to generate some money out of the designs, with a spokesman for the Corporation saying that it was "never interested in stifling fan creativity in any way". The woman behind the patterns for the fat, white Adipose and the squid-faced Ood characters has been invited to meet BBC executives with a view to creating "a limited edition of exclusive promotional products" for the public to buy.

The new thinking is that it may even be possible to link the availability of the knitting patterns and knitted figures to the planned launch of a new range of Doctor Who toys. The BBC is working on releasing a soft toy Adipose of its own some time around the end of the summer or early autumn. On her website, Mazzmatazz, who has chosen not to reveal her real name, said that she "just wanted to thank everyone who has sent me a message of support over the past few days" and confirmed that she was "currently discussing matters with the BBC".

The Doctor Who producers are said to be smitten with the designs, and the team plans to present Russell. T Davies, the executive producer, with one of Mazzmatazz's knitted Adipose characters, now that they have become aware of them after media coverage.

Copyright lobbyists who first highlighted the case on the Internet said that they were delighted with the. BBC's change of heart. But they said that the law did not support fans who took content created by media companies as the starting point for their own creativity.

Becky Hogge, from the Open Rights Group, said: "This is great news for Mazzmatazz, but this does not change the law. It is very easy for media companies to threaten fans of their content, and we'd like the law changed to give fans more rights".

The BBC said that it had contacted Mazzmatazz and asked her to stop making the knitting patterns available on the interact because, once made, some of the toys were being sold on eBay. Mazzmatazz was not charging for the designs.

What makes the episode more significant is that changing technology is, making it easier for fans to create and distribute content based on their favourite programmes, causing a dilemma for copyright holders who have to decide whether to risk bad publicity and threaten legal action, or let them run.