Take me back to the future! 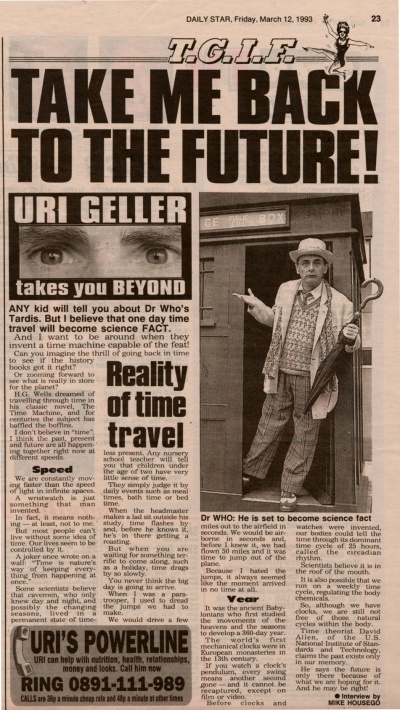 Uri Geller takes you beyond

ANY kid will tell you about Dr Who's Tardis. But I believe that one day time travel will become science FACT.

And I want to be around when they invent a time machine capable of the feat!

Can you imagine the thrill of going back in time to see if the history books got it right?

Or zooming forward to see what is really in store for the planet?

H.G. Wells dreamed of travelling through time in his classic novel, The Time Machine, and for centuries the subject has baffled the boffins.

I don't believe in "time". I think the past, present and future are all happening together right now at different speeds.

We are constantly moving faster than the speed of light in infinite spaces.

A wristwatch is just something that man invented.

In fact, it means nothing — at least, not to me.

But most people can't live without some idea of time. Our lives seem to be controlled by it.

A joker once wrote on a wall: "Time is nature's way of keeping everything from happening at once."

Some scientists believe that cavemen, who only knew day and night, and possibly the changing seasons, lived in a permanent state of timeless present. Any nursery school teacher will tell you that children under the age of two have very little sense of time.

They simply judge it by daily events such as meal times, bath time or bed time.

When the headmaster makes a lad sit outside his study, time flashes by and, before he knows it, he's in there getting a roasting.

But when you are waiting for something terrific to come along, such as a holiday, time drags by so slowly.

You never think the big day is going to arrive.

When I was a paratrooper, I used to dread the jumps we had to make.

We would drive a few miles out to the airfield in seconds. We would be airborne in seconds and, before I knew it, we had flown 50 miles and it was time to jump out of the plane.

Because I hated the jumps, it always seemed like the moment arrived in no time at all.

It was the ancient Babylonians who first studied the movements of the heavens and the seasons to develop a 360-day year.

The world's first mechanical clocks were in European monasteries in the 13th century.

If you watch a clock's pendulum, every swing means another second ,gone — and it cannot be recaptured, except on film or video.

Before clocks and watches were invented, our bodies could tell the time through its dominant time cycle of 25 hours, called the circadian rhythm.

Scientists believe it is in the roof of the mouth.

It is also possible that we run on a weekly time cycle, regulating the body chemicals.

So, although we have clocks, we are still not free of those natural cycles within the body.

Time theorist David Allen, of the U.S. National Institute of Standards and Technology, claims the past exists only in our memory.

He says the future is only there because of what we are hoping for it. And he may be right!

Dr WHO: He is set to become science fact