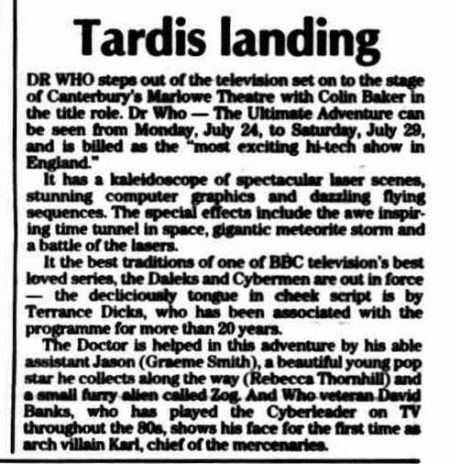 DR WHO steps out of the television set on to the stage of Canterbury's Marlowe Theatre with Colin Baker in the title role. Dr Who - The Ultimate Adventure can be seen from Monday, July 24, to Saturday, July 29, and is billed as the most exciting hi-tech show in England."

It has a kaleidoscope of spectacular laser scenes, stunning computer graphics and dazzling flying sequences. The special effects include the awe inspiring time tunnel in space, gigantic meteorite storm and a battle of the lasers.

It the best traditions of one of BBC television's best oved series, the Daleks and Cybermen are out in force - the decliciously tongue in cheek script is by Terrance Dicks, who has been associated with the programme for more than 20 years.

The Doctor is helped in this adventure by his able by assistant Jason (Graeme Smith), a beautiful young pop star he collects along the way (Rebecca Thornhill) and a small furry alien called Zog And Who veteran David Banks, who has played the Cyberleader on TV throughout arch villain Karl, chief of the mercenaries.