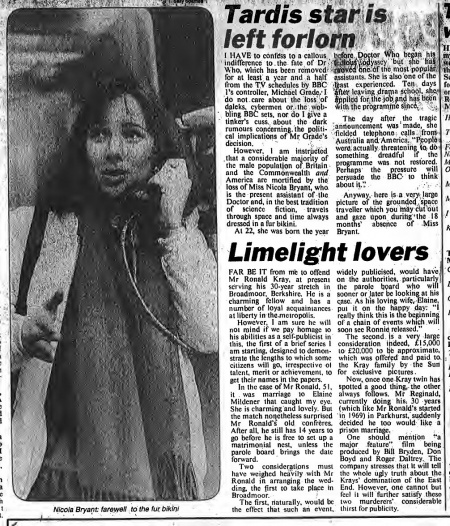 I HAVE to confess to a callous indifference to the fate of Dr Who, which has been removed for at least a year and a half from the TV schedules by BBC 1's controller, Michael Grade. I 'do not care about the loss of daleks, cybermen or, the wobbling BBC sets, nor do I give a tinker's cuss about the dark rumours concerning the political implications of Mr Grade's decision.

However, I am instructed that a considerable majority of the male population of Britain and the Commonwealth and America are mortified by the loss of Miss Nicola Bryant, who is the present assistant of the Doctor and, in the best tradition of science fiction, travels through space and time always dressed in a fur bikini.

At 22, she was born the year before Doctor Who begain his tedious odyssey but she has proved to be one of the most popular assistants. She is also one of the least experienced. Ten days after leaving drama school, she applied for the job and has been with the program since.

The day after the tragic announcement was made, she fielded telephone calls from Australia and America. "People were actually threatening to do something dreadful if the programme was not restored. Perhaps the pressure will persuade the BBC to think about it."

Anyway, here is a very large picture of the grounded space traveller which you may cutout and gaze upon, during the 18 months' absence of Miss Bryant.